The Climathon is a global initiative launched by Climate KIC, in which more than 110 cities on 6 continents will participate. It is a challenge initiated by regions engaged in climate action.

75% of EU citizens live in urban areas, and 70% of greenhouse gas emissions that are responsible for climate change derive from cities. No doubt remains regarding the reality of the climate emergency, a fact confirmed by the 8th October IPCC Report on the consequences of a 1.5°C rise in global temperatures.

While the 2015 Paris Agreement represents one of the most important milestones in recent years in terms of global awareness, it is no longer only a matter of taking action at the governmental level, but also at the local scale and closer to the everyday lives of citizens.

Climathons are organized in this spirit, to challenge collective thinking on environmental issues. But also to foster the emergence of innovations designed to address the specific climate challenges faced by communities; and thus improve the lives of inhabitants while promoting more efficient and virtuous urban policies.

Each participant city defines a specific issue according to its local challenges. Experts, entrepreneurs, elected officials and citizens will work together on these issues to co-create new climate change adaptation strategies. In the same vein as a hackathon, participants will be divided into teams to think through, create and present their projects to a local jury. 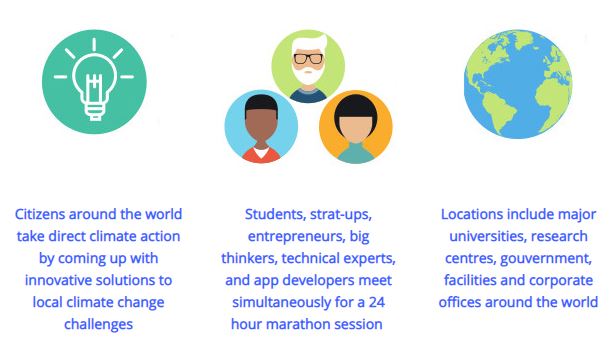 Project Manager - Adaptation to Climate Change Email
Subscribe to our newsletter Once a week, receive all the information on climate economics
I'm registering !
Fermer