Following the 2018 review of the European carbon market- the EU Emission Trading System (EU ETS)- and the significant increase in the price of allowances, many stakeholders made the assumption that it was “fit for purpose” until 2030. However, the EU ETS needs to evolve as it adapts to new developments such as the implementation of other climate and energy policies or the Brexit.

This is the reason why, each year, I4CE, ERCST, Wegener Center, ICIS and Ecoact review the carbon market to discuss if it delivers on its environmental and economic objectives, and to highlight any issues that need to be better understood. The “State of the EU ETS” Report aims to be an independent contribution to the policy debate.

Take-away from the 2019 edition

Emissions from sectors covered by the EU ETS decreased again in 2018 after a minor increase in 2017. Sectors for which data is available showed year-to-year improvements in carbon intensity, an encouraging sign.

The 2018 decrease in emissions was considerable: it was 1.8 times higher than the decrease in the cap. This puts the EU ETS back on track to (over) deliver on its short-term emissions reductions objectives. However, the continuation of the decrease in the cap would not be sufficient for the EU to meet its long term climate target outlined in its ‘2050 Roadmap’ and even less to reach carbon neutrality by 2050

If power sector data shows that the EU ETS has not been the main driver for emission reductions, 2018 might indicate that a change is happening. For the first time the CO2 price in the EU ETS was above minimum switching price levels between coal and gas-fired plants throughout the year. This means that the EU ETS was able – to some extent – to disadvantage coal-fired power generation at the benefit of gas-fired power generation in 2018.  The CO2 price nevertheless is far from being able to support the mass deployment of new low-carbon technologies such as hydrogen.

Historically, free allocation has largely covered direct costs for the industrial sector, with contrasted situations in the different sectors. But the trend has reversed, with 2018 being the second consecutive year when industrial installations as a whole experienced a net direct cost: they had to pay for 3.5% of their emissions. Indirect costs are a continuous and growing concern, considering the lack of a harmonized EU-approach to compensation and the long-term drive for increased electrification, which leaves the door open to potential distortions.

With regard to the use of auctioning revenues, Member States report they spent 80% of their auctioning revenues on climate and energy purposes for the period 2013-2017– a vital flow of cash for climate action, which will become more important as prices keep on rising. However, the fact that this number is based on self-reported data from Member States calls for analysis to determine whether this spending is additional or not.

The eight KPIs used to evaluate the functioning of the market show that the market again functioned better compared to last year: five out of the eight tracked KPIs exhibited an improvement, while only 3 KPI showed a worsening performance. There is some indication that more speculation is occurring, an element which will have to be monitored in the coming years.

Finally, and very importantly, the report identifies a number of issues that will need to be monitored in the coming years, to ensure that the EU ETS is “fit for purpose” and ready to face future challenges. Among the issues to keep “on the radar” are Brexit, CORSIA and aviation in the EU ETS or the review of the Market Stability Reserve. Moreover, the EU will eventually have to finance and incentivize the deployment of carbon negative technologies: the interactions of such mechanisms with the EU ETS will have to be analyzed. 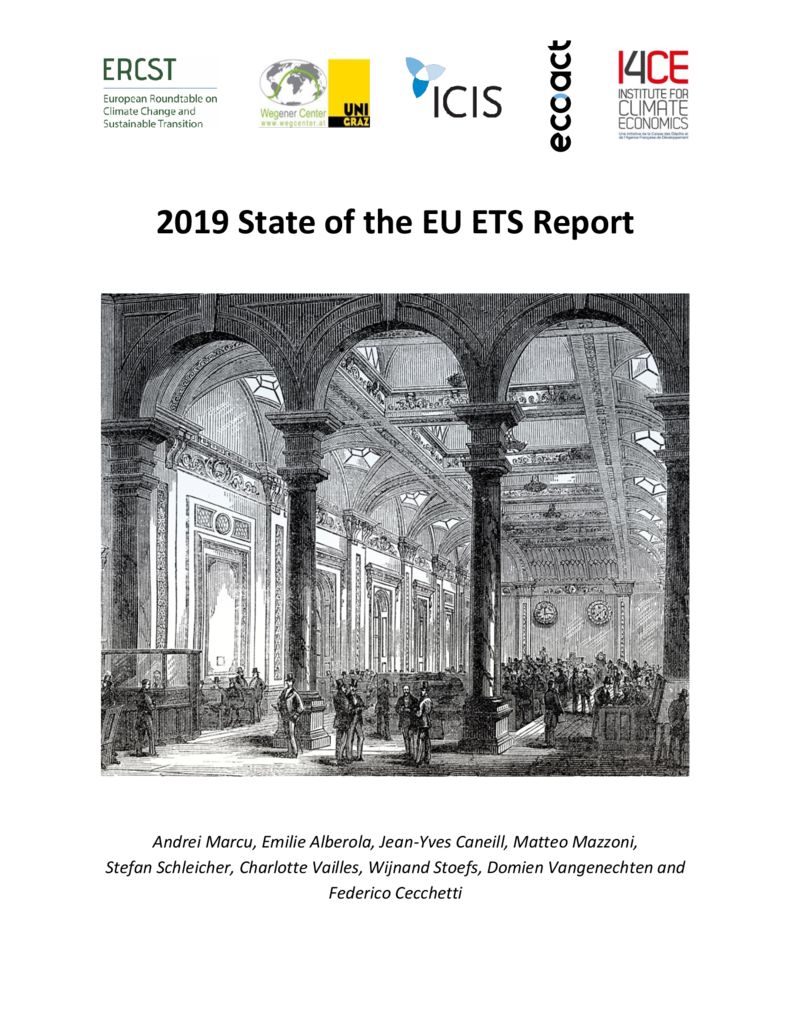