Assessing the factors behind CO2 emissions changes over the phases 1 and 2 of the EU ETS: an econometric analysis

By Olivier GLOAGUEN and Emilie ALBEROLA

It has been repeatedly said that the economic slowdown that began in 2008 largely explains the fall in carbon emissions recorded in Europe since the introduction of the European Union Emissions Trading Scheme (EU ETS). In fact, the European Union stated this very clearly in its initial report on the operation of the EU ETS in November 2012. Using an econometric analysis based on a business-asusal scenario, it is shown that reductions of around 1.1 GtCO2 are likely to have been achieved within the scope of the 11.000 installations covered by the EU ETS. Of those reductions, between 600 and 700 million tonnes are said to have resulted from the two policies in the 2020 Climate & Energy Package, which aims to achieve a 20% renewable energy target (a decrease of around 500 million tonnes) and a 20% improvement in energy intensity (a decrease of between 100 and 200 million tonnes). The economic downturn also played a significant, although not dominant role in the decrease in CO2 emissions, the impact of which was estimated at 300 million tonnes. Price substitution effects induced by coal and gas prices also seem to have affected emissions, within an order of magnitude of around 200 million tonnes. The study does not enable any impact created by the carbon price to be identified. It is important. However, to emphasize that the economic downturn and the development of RE were responsible for the decrease of the carbon price, and specifically marginalised its influence in terms of CO2 emission reductions at the installations covered within the EU. 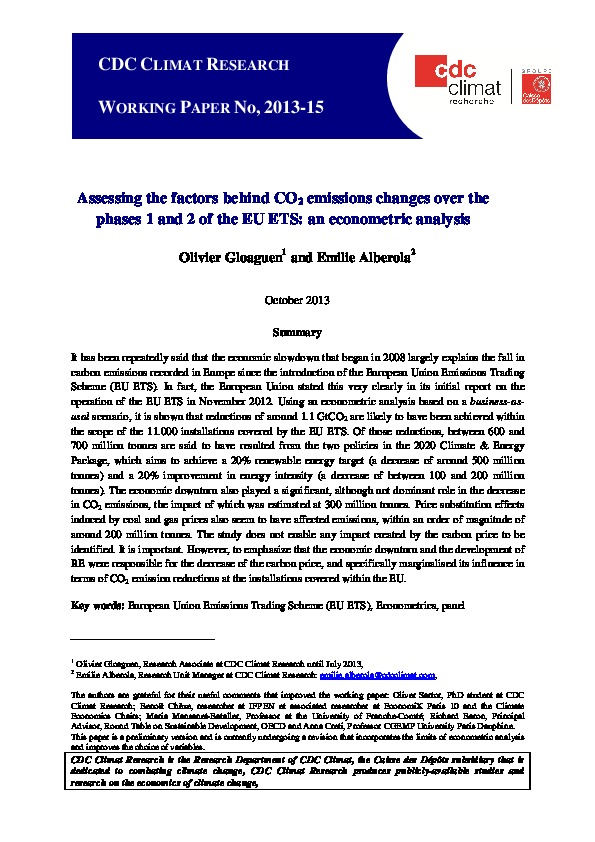 Assessing the factors behind CO2 emissions changes over the phases 1 and 2 of the EU ETS: an econometric analysis pdf
To learn more See all publications
Press contact Amélie FRITZ Head of Communication and press relations Email
Subscribe to our mailing list :
I register !
Subscribe to our newsletter
Once a week, receive all the information on climate economics
I register !
Fermer