In a world with asymmetrical climate policies, the conclusions of the European Council of October 2014 agreed on continuing the allocation of free CO2 emissions allowances beyond 2020 to industrial sectors in the EU ETS. This statement has been confirmed in the European Commission’s proposal to revise EU ETS directive for phase IV disclosed in July 2015. The stated objective is to ensure that the most efficient industrial installations do not face undue carbon costs which would lead to carbon leakages. Furthermore, free allocations should not undermine the incentive to cut CO2 emissions, lead to distortions or windfall profits and reduce the auctioning share of allowances.

From 2013 to 2020, the allocation of free allowances has been defined according to harmonized European rules based on benchmarks (carbon intensity targets) and historical output adjusted to the free allocation cap by applying the Cross-Sectoral Correction Factor (CSCF). What would be the impact of pursuing the current mechanism through to 2030? Does the EU Commissions’ proposal of 15th July respond to the Council’s requirements? Which alternative mechanisms could do so?
This study examines four scenarios and their potential consequences.

In the end, it appears that a combination of instruments is needed to forge a credible roadmap for decarbonisation of industry sectors: a predictable carbon price signal, flexible and targeted free allocation, as well as additional instruments to steer demand for low-carbon products and the emergence of innovative production processes. 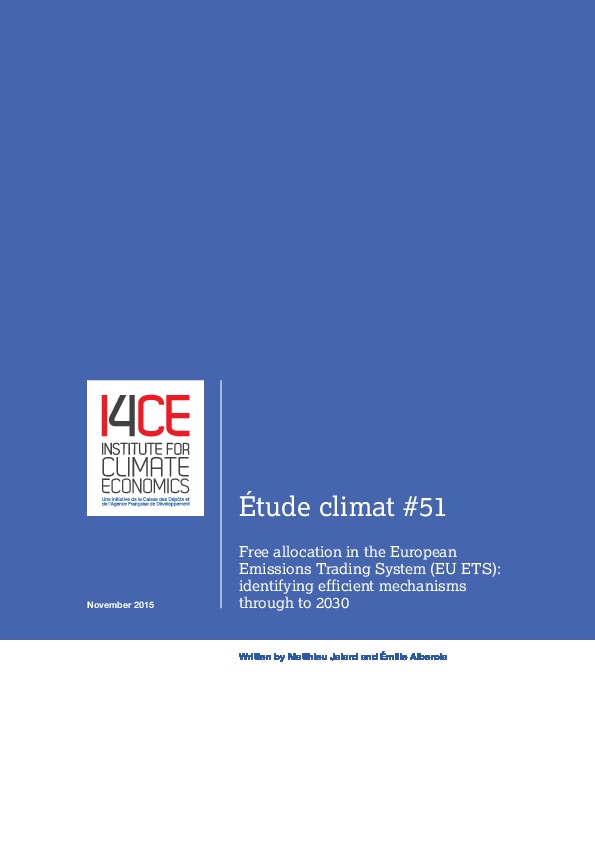 Climate Report No.51: FREE ALLOCATION IN THE EUROPEAN EMISSIONS TRADING SYSTEM (EU ETS): IDENTIFYING EFFICIENT MECHANISMS THROUGH TO 2030 pdf
To learn more See all publications
Press contact Amélie FRITZ Head of Communication and press relations Email
Subscribe to our mailing list :
I register !
Subscribe to our newsletter
Once a week, receive all the information on climate economics
I register !
Fermer