A Framework for Alignment with the Paris Agreement: Why, What and How for Financial Institutions?

Since the adoption of the Paris Agreement, financial institutions and other economic actors have taken commitments to ‘align’ their activities with the goals agreed to by national governments in 2015. A growing body of literature from both the research community and practitioners has emerged on ‘alignment’ with the Paris Agreement goals – but to date no overarching framework has been proposed to define what it means and implies in practice. This Discussion Paper written by I4CE aims to fill this gap and propose a framework that can be used by all institutions, governments and companies to develop their alignment strategies.

Part of a joint study conducted with the Climate Policy Initiative, this discussion paper proposes a framework that can be used by financial institutions seeking to align strategies and operations with the Paris Agreement. Building on an analysis of how the Paris Agreement has reframed climate action from a focus on the near-term incremental increase of adaptation and mitigation actions to emphasize the long-term transformation of economies and societies, I4CE‘s framework for alignment specifies three dimensions for action:

A Comprehensive Scope of Action: institutions should seek to directly or indirectly support low-GHG climate-resilient development across all business areas – and take into account impacts on broader systems and value chains.

A Long-Term Time Horizon to Guide Impact: institutions should prioritize actions that are consistent with both near-term climate objectives and long-term goals and do not lead to lock-in or mal-adaptation.

An Ambitious Scale of Contribution: institutions should seek to contribute to the ambitious goals of the Agreement through activities that: 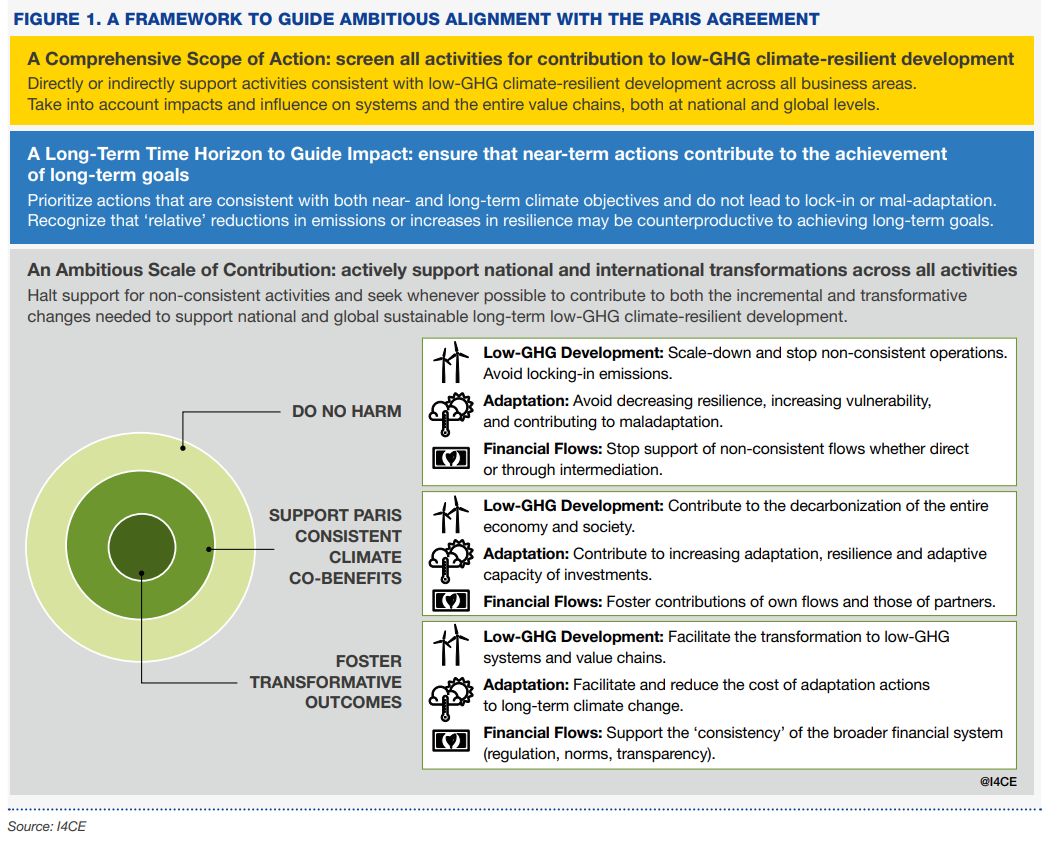 Furthermore, Paris alignment should take into account national contexts and support shared pathways or ‘visions’ of how long-term climate goals could be met nationally and internationally.

Moving from theory to practice, the paper applies the framework to the case of financial institutions to help understand the implications of aligning with the Paris Agreement and integrating these considerations at the strategic and operational levels.

This work received financial support from the European Climate Foundation.

About the Joint Study

Mandated by the International Development Finance Club (IDFC) and supported by the European Climate Foundation (ECF), Climate Policy Initiative (CPI) and the Institute for Climate Economics (I4CE) have conducted a research project in two parts, resulting in a Discussion Paper (Part 1) and a Final Report (Part 2) on “Aligning with the Paris Agreement”.

Part 1 is led by I4CE to provide a “Framework for Alignment with the Paris Agreement”.

Part 2 led by CPI identifies the changes the Paris Agreement implies for the role of Development Finance Institutions (DFI) – specifically, members of the IDFC – and how they may implement these changes, through a targeted set of activities.

A Framework for Alignment with the Paris Agreement: Why, What and How for Financial Institutions? pdf
I4CE Contacts