From Phase 3 (2013-20) of the European Union Emissions Trading Scheme, carbon-intensive industrial emitters will receive free allocations based on harmonised, EU-wide benchmarks. This paper analyses the impacts of these new rules on allocations to key energy-intensive sectors across Europe. It explores an original dataset that combines recent data from the National Implementing Measures of 20 EU Member States with the Community Independent Transaction Log and other EU documents. The analysis reveals that free allocations to benchmarked sectors will be reduced significantly compared to Phase 2 (2008-12). This reduction should both increase public revenues from carbon auctions and has the potential to enhance the economic efficiency of the carbon market. The analysis also shows that changes in allocation vary mostly across installations within countries, raising the possibility that the carbon-cost competitiveness impacts may be more intense within rather than across countries. Lastly, the analysis finds evidence that the new benchmarking rules will, as intended, reward installations with better emissions performance and will improve harmonisation of free allocations in the EU ETS by reducing differences in allocation levels across countries with similar carbon intensities of production. 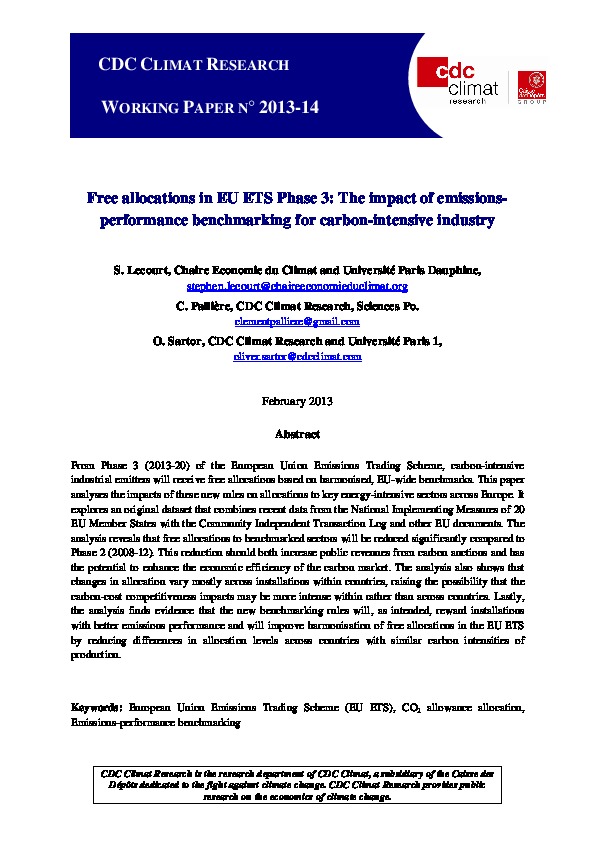 Free allocations in EU ETS Phase 3: The impact of emissions performance benchmarking for carbon-intensive industry pdf
To learn more See all publications
Press contact Amélie FRITZ Head of Communication and press relations Email
Subscribe to our mailing list :
I register !
Subscribe to our newsletter
Once a week, receive all the information on climate economics
I register !
Fermer