Agriculture and forestry: window-dressing in the EU ETS

Backloading and reforms of the EU ETS: on 10th December, the EU Parliament voted the backloading proposal. The vote of the Council is scheduled on 17th December. The postponement of EUA will be made in 2014 and in 2015 (not in 2013).

2030 climate and energy package: the EC is planning to release its White Paper, which will include 2030 targets as well as a section on structural reforms of the EU ETS, on 21st January 2014.

Fall in EUA prices and a rise in volumes: the EUA spot price continued its fall averaging €4.53 in November (a monthly fall of 8%). Total traded volumes of carbon credits (EUA, CER  and ERU) increased by 6% in November to 748 million. 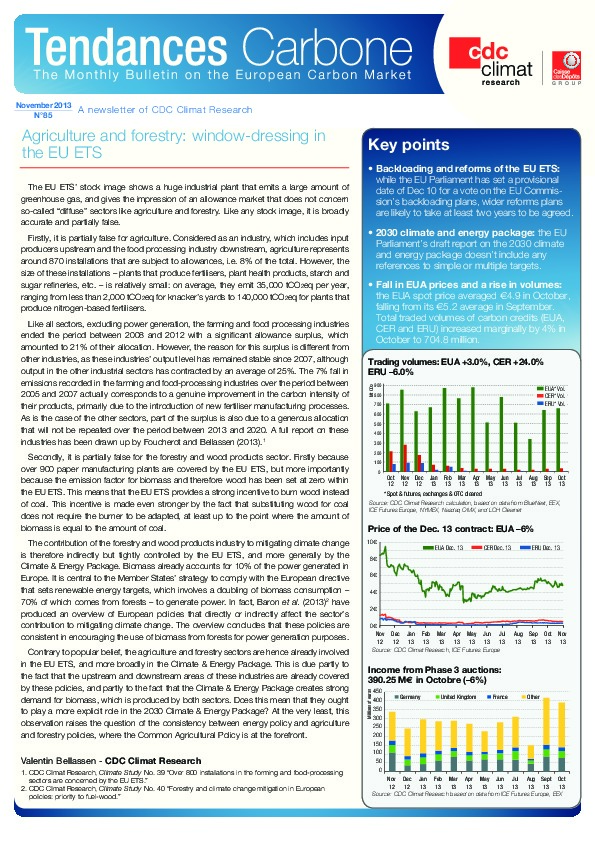 Agriculture and forestry: window-dressing in the EU ETS pdf
To learn more See all publications
Press contact Amélie FRITZ Head of Communication and press relations Email
Subscribe to our mailing list :
I register !
Subscribe to our newsletter
Once a week, receive all the information on climate economics
I register !
Fermer