European Offset Projects: A tool to rally Poland towards the 2030 Energy Climate Package

EUA supply: after the approbation of the backloading regulation, the number of auctioned allowances for 2014 will be reduced by 400 million. National allocations plans of all 28 member states for the free allocation of allowances for 2013 have been approved.

2030 climate and energy package: the EU Parliament adopted a non-binding resolution on the 2030 Climate and Energy Framework. On 20-21 March the European Council will meet to discuss this framework.

Carbon leakage list for 2015-2019: industrial stakeholders will be informed at the latest by the end of March 2014 if their sectors are included on the first draft of the new carbon leakage list. 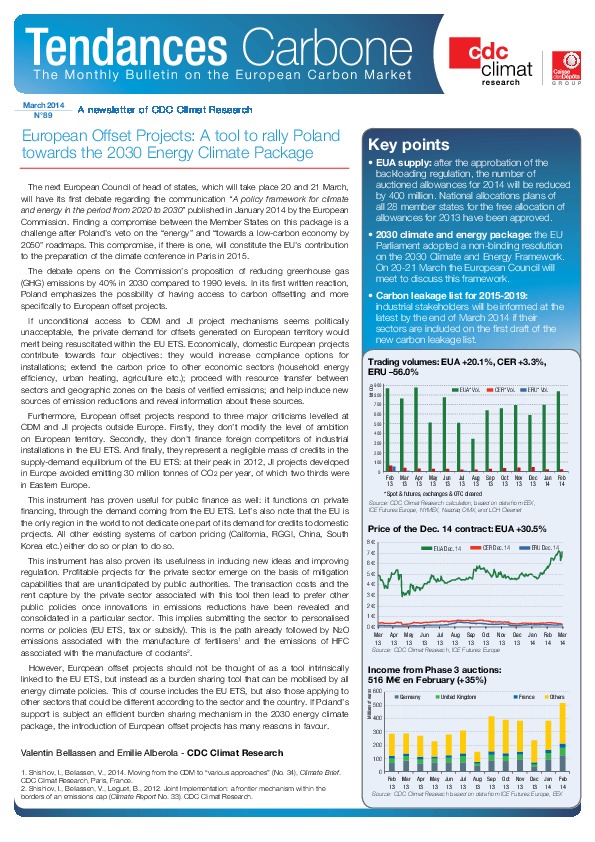 European Offset Projects: A tool to rally Poland towards the 2030 Energy Climate Package pdf
To learn more See all publications
Press contact Amélie FRITZ Head of Communication and press relations Email
Subscribe to our mailing list :
I register !
Subscribe to our newsletter
Once a week, receive all the information on climate economics
I register !
Fermer