The CO2 emissions of the European power sector: economic drivers and the climate-energy policies ‘contribution.

In the frame of the ongoing debate on the 2030 energy and climate policies in the European Union, this article provides the first assessment of the effectiveness of European energy and climate policies on the CO2 emissions reductions. This ex-post analysis deals with the CO2 emissions of the electricity sector covered by the European Union Emission Trading Scheme (EU ETS) during its phases I and II (2005-2012). We analyze the contribution of different variables (including climate and energy policies, energy prices, economic activity and technical features of plants) in the evolution of CO2 emissions from electricity production plants in Europe. The empirical results allow drawing a number of conclusions regarding the causes of the downward trend in the carbon emissions generated by power production covered by the EU ETS between 2005 and 2012. First, we show that the increased use of renewable energy in electricity production has played a dominant role in the fall in CO2 emissions in the power sector. Second, the analysis confirms that the economic downturn has played a significant role, although not a dominant one. Third, price substitution effects between coal and gas also seem to have affected carbon emissions. Last but not least, we identify that the price of carbon has also pushed down power CO2 emissions. 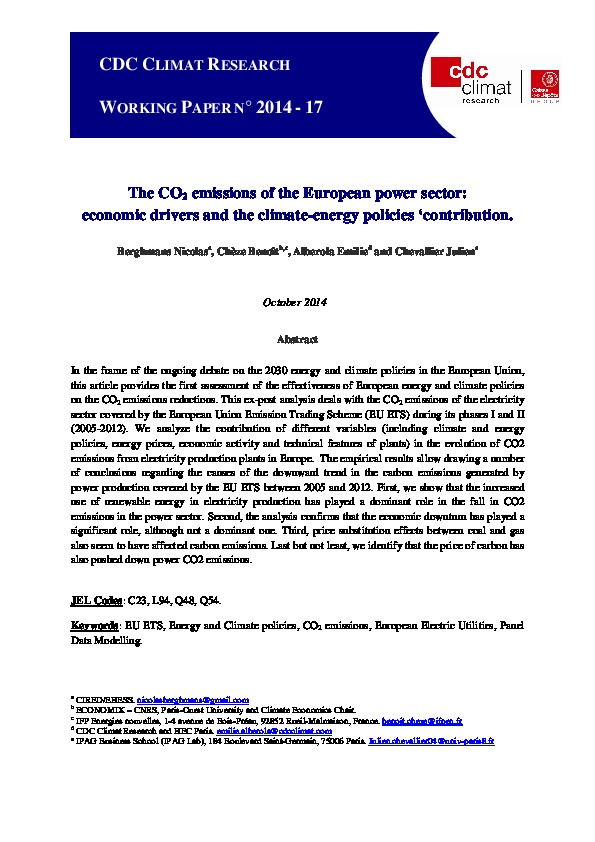 The CO2 emissions of the European power sector: economic drivers and the climate-energy policies ‘contribution. Download
To learn more See all publications
Press contact Amélie FRITZ Head of Communication and press relations Email
Subscribe to our mailing list :
I register !
Subscribe to our newsletter
Once a week, receive all the information on climate economics
I register !
Fermer