The risks of CDM projects: how did only 30% of expected credits come through?

By Alain CORMIER and Valentin BELLASSEN

The Clean Development Mechanism (CDM), launched in 2001, has attracted more than 7 000 projects. Many however, did not fully deliver the emissions reductions promised in their project design documents: out of 1.8 billion of expected Certified Emissions Reductions (CER) by April 1st, 2011, only 576 million had been issued. This study classifies the risks incurred by CDM projects, attributes a share of the non-delivered CER to each risk, and identifies the most influent factors driving each risk. 29% of expected CER will never be issued due to failure of projects (negative validation, project withdrawn, …), 12% were not issued on time due to delays during the approval process (validation and registration), 27% were not issued on time due to delays at issuance, and only 1% will never be issued due to underperformance of projects in terms of CER delivered per day. Technology is identified as a key driver for all these risks: some technologies are less risky than others. Time is mainly influencing approval process and issuance delay. Other factors such as location, size of the project, auditor or consultant are occasionally important, but not for each risk. 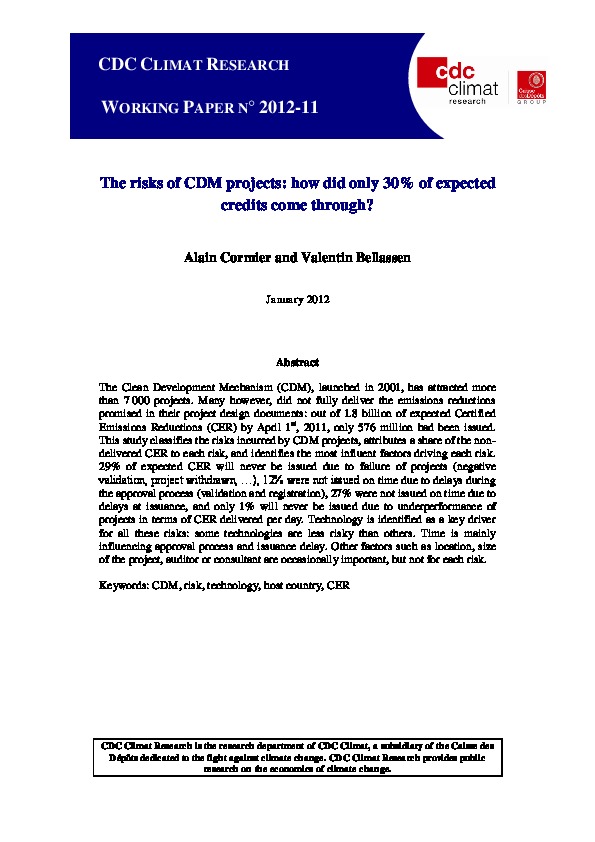 The risks of CDM projects: how did only 30% of expected credits come through? pdf
To learn more See all publications
Press contact Amélie FRITZ Head of Communication and press relations Email
Subscribe to our mailing list :
I register !
Subscribe to our newsletter
Once a week, receive all the information on climate economics
I register !
Fermer