The Regional Climate-Air-Energy Plan (SRCAE – Schéma Régional Climat-Air-Energie) was introduced by the Grenelle II legislation. The Plans are co-authored by the State through its decentralised services and the Conseil Regionaux (regional councils) with the objective to guide climate and energy policy in the 26 French regions through to 2020 and 2050. Starting from an assessment of regional greenhouse gas (GHG) emissions, the SRCAE establishes energy transition scenarios based on the sectoral and structural guidelines that constitute the principal framework of the regional strategy.

This report offers a detailed analysis of the strategies chosen by the various Regions for a successful transition to low-carbon energy sources, via the study of eleven SRCAEs that were opened to public consultation before the end of July 2012 (Alsace, Aquitaine, Auvergne, Bourgogne, Centre, Champagne-Ardenne, Ile-de-France, Midi-Pyrénées, Nord-Pas de Calais, Picardie and Rhône-Alpes regions). The wide range of methodologies used by the Regions, both to draw up their inventories of GHG emissions and for their scenarios, means that a quantitative comparison between regions or against the national objectives is not possible. Nevertheless, the report establishes a typology of regions and identifies policies that are common to all regions and those chosen in response to local characteristics. Certain guidelines could be applied by other regions of the same type, or could feed into discussions at national level. The report also indicates that the SRCAEs go beyond the competencies of the Regions, highlighting the role of local, national and European decision-making in the success of a regional energy transition. 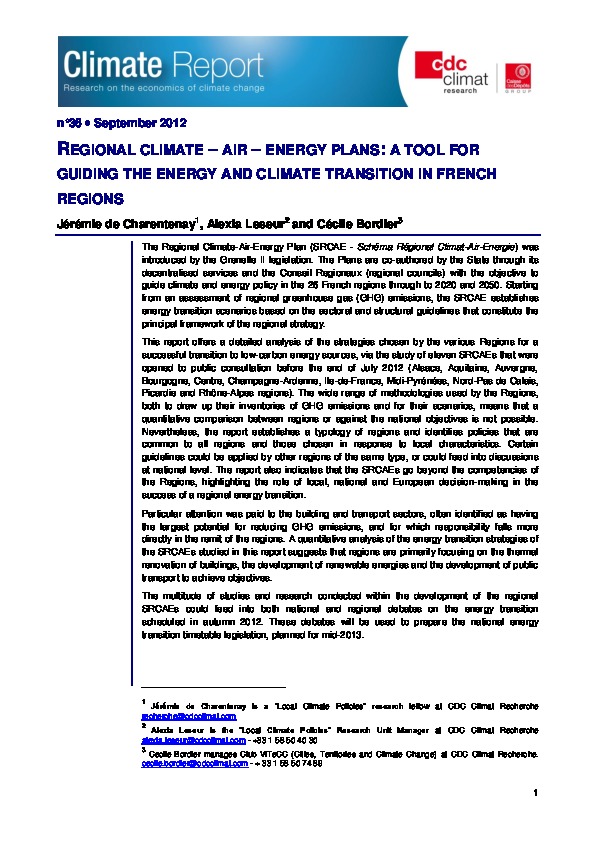 Regional climate – air – energy plans: A tool for guiding the energy and climate transition in French regions pdf
To learn more See all publications
Press contact Amélie FRITZ Head of Communication and press relations Email
Subscribe to our mailing list :
I register !
Subscribe to our newsletter
Once a week, receive all the information on climate economics
I register !
Fermer