Ensuring sufficient means to adapt to climate change consequences in France: What are the costs?

This study is a contribution to the French public debate. It aims at supporting the acceleration and concretization of climate change adaptation initiatives in this country. The study reviews 11 adaptation challenges such as the strengthening of civil protection, the reshaping of coastal areas or the protection of water resources. For each challenge, the study presents national budgetary decisions ready to make in the next Finance Bill that would complement existing actions and cost elements to feed the required arbitrations yet to be made.

Although France has had a National Adaptation Strategy since 2005 and a 2nd National Adaptation Plan (PNACC2) since 2017, concrete action in terms of anticipating the consequences of climate change remained limited up to now. However, since the publication of the volume II of the 6th IPCC report and especially in a context of increasing number of exceptional meteorological events (drought, succession of heat waves associated with major fires, episodes of intense precipitation, late frosts, etc.) formally attributed by scientists to climate change, the subject has started to take another dimension. National (ministries, member, or Parliament) and sub-national (local authorities) public decision-makers are now seeking to provide operational responses to address the issue. The current preparation of the future French Climate and Energy Strategy (SFEC), which for the first time should combine mitigation and adaptation to climate change in a common approach, should be one of the key moments of this evolution.

As a specialist in the economic and financial aspects of climate issues, the Institute for Climate Economics (I4CE) has sought to support this dynamic by focusing on the question of the resources to be mobilized for adaptation. Indeed, beyond the existing work on the costs of inaction, it is by raising the question of the costs of action in a very concrete way and by monitoring the resources actually allocated to different subjects that it is possible to move from words to action.

This study builds on the results of previous work which highlighted the need for public action to catalyze adaptation in France. It is indeed necessary today to sensitize and mobilize all the actors concerned, to create an environment enabling adaptation and to make sure that socially beneficial actions that do not have an immediate economic model are well funded.

We have therefore intended to show where these needs lie, to qualify their nature (investment needs, but also engineering and human resource needs) and to give an initial quantitative estimate of the amounts involved. The emphasis of the analysis is very clearly placed on the needs relating to the consideration of adaptation by and in public policies (the complementary part of the adaptation initiative coming from private actors is not addressed here).

An initial set of 18 national budgetary measures – representing an additional annual budget of €2.3 billion – that can be taken now to prepare, strengthen or operationalize adaptation actions that have already been prepared.

In terms of adaptation, it is most often through the combination of complementary actions that solutions can be found. These 18 proposals* are intended to be part of a coherent set of measures that constitute a real adaptation policy. The challenge is to ensure that resources are allocated to a range of action types that perform well together, rather than to concentrate resources on a few flagship proposals:

These measures constitute the initial building blocks that should make it possible to respond to the risk identified, but also to ensure that subsequent decisions will integrate adaptation and that we are already starting to prepare for the deeper transformations that may be necessary:

The – potentially much higher – costs of other requirements will depend on the political decisions resulting from debates that must begin soon.

Adaptation costs will not be limited to the costs of these 18 measures. But the total sums to be committed will depend on the political decisions yet to be made, and therefore on the democratic debates ahead.

The issues at stake raise fundamental questions on the level of risk that we are collectively ready to accept when new development is planned; on the activities or territories that we wish to protect and those where transformation would be considered acceptable; on agricultural and tourism models that we wish to foster, and even on the level of solidarity between territories with different degrees of vulnerability.

Making progress in the construction and development of a social consensus is a necessary prerequisite for building the adaptation policy, and also therefore for evaluating the associated investment needs. At this stage, it is above all possible to establish milestones that will enable a better understanding of the types of needs associated with different alternatives.

There are specific requirements associated with each of these choices, that may increase the cost of achieving other public policy objectives. However, they will also serve as a guarantee that these objectives can be achieved in the long term, despite the impacts of climate change. The costs of adaptation are therefore no more and no less than the costs of adapted and resilient transition, transport, health, planning and tourism development policies.

*The measures detailed are proposals for budgetary debate. They have been formulated and quantified on the basis of the shortfalls expressed by the actors concerned. These figures, particularly those relating to issues that have not yet been sufficiently discussed, will be refined in the coming months through consultations on each topic. However, the orders of magnitude shown are sufficiently robust to justify their immediate inclusion in public budgets. 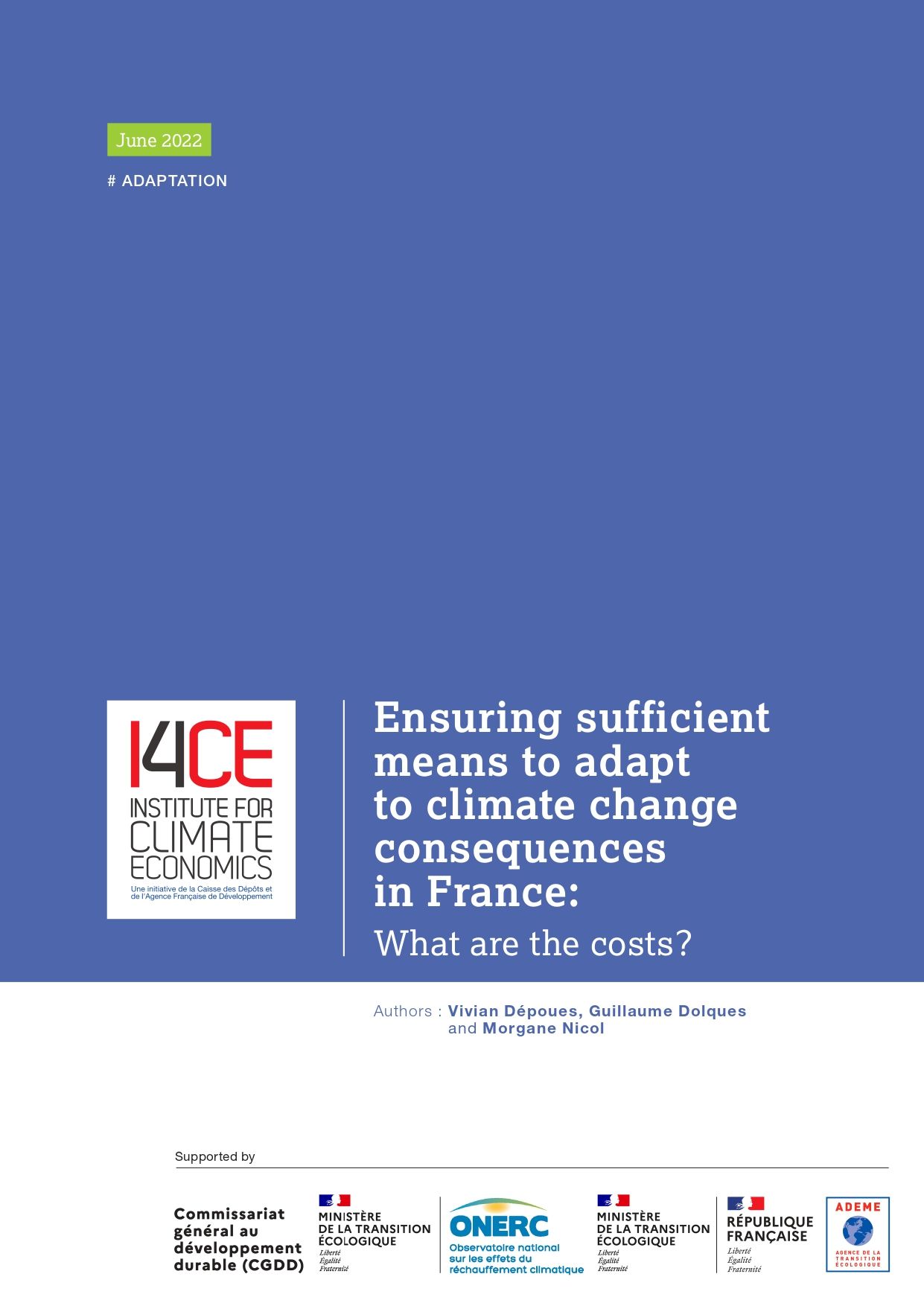 Ensuring sufficient means to adapt to climate change consequences in France: What are the costs? pdf
See appendices
I4CE Contacts

Program Director - Territories Email
Related projects See all projects
To learn more See all publications
Press contact Amélie FRITZ Head of Communication and press relations Email
Subscribe to our mailing list :
I register !
Subscribe to our newsletter
Once a week, receive all the information on climate economics
I register !
Fermer