To achieve the climate goals of the UE, The European Commission wants to create a carbon certification framework to encourage carbon storage in the land sector. The challenge is to develop a common and harmonised framework at the European level by better relying on the expertise acquired through existing certification frameworks. With this study, I4CE propose 7 recommendations, inspired by both our concrete experience with the French Label Bas-Carbone to which we have contributed, and by 15 years of research on carbon certification.

The European climate law (Regulation (EU) 2021/1119), published in July 2021, requires the EU to achieve a balance between greenhouse gas (GHG) emissions and removals by 2050 at the latest, and to achieve negative emissions (i.e. net absorption) thereafter.

Currently, the agricultural sector is a net emitter and European carbon sinks have been declining for several years. The land sector, however, is essential for achieving a carbon neutral economy, as it can capture CO2 from the atmosphere and store it in soils and biomass. To encourage this sector to carry out climate action, financial incentives are needed to help land managers significantly increase carbon sinks. In order to ensure their effectiveness, such financing must be accompanied by tools to measure the real impact of the actions financed.

With this in mind, in December 2021 the European Commission (EC) adopted the Communication on `Sustainable Carbon Cycles’ (European Commission, 2021), which includes plans to build a European certification for carbon removals to guarantee the impact of funded projects. A multitude of public and private frameworks already exist in Europe and internationally, but they do not have the same levels of requirements and the same rules for Monitoring, Reporting and Verification (MRV) of carbon gains. The challenge will be to develop a common and harmonised framework at the European level without reinventing the wheel, by better relying on the expertise acquired through existing certification frameworks. After a public consultation opened in early 2022, the proposed regulation should be published by the end of the year.

7 recommendations from the French experience with the Label Bas-Carbone

Recommendation 1: Emissions reductions and emissions removals should not be split

Currently, the certification planned by the European Commission only concerns CO2 removals, and not emission reductions which would be covered by other mechanisms. We believe however, it is necessary to include in the scope of the certification framework not only storage, but also emission reductions of N2O and CH4 from the agricultural sector as well as indirect emission reductions (emissions that are linked to the project but take place outside the project perimeter). Without this comprehensive view of a project’s climate impact, there is a risk of favouring practices that have a net negative impact. An example would be a biomass production project, which relies heavily on nitrogen fertilizers. With the scope chosen today, only the carbon sequestration linked to the biomass would be counted and not the emissions linked to the fertilisers.

This point is the subject of considerable debate, as some stakeholders see the risk that an increase in absorptions will conceal a lack of ambition in achieving the emission reduction targets. Broadening the scope, however, does not mean merging the two distinct objectives.

Following the example of what is required under the French Label Bas-Carbone, a differentiated accounting of emissions reductions and removals makes it possible to monitor the evolution of the carbon sink on the one hand and agricultural emissions on the other. This avoids the risk of opacity between objectives.

Achieving climate objectives must not mean we forget the other sustainability issues, in order to guarantee the environmental integrity of projects but also their acceptability. Integrating these issues properly requires discussion with stakeholders and the scientific community.

Several options are being tested or discussed as part of the French Label Bas-Carbone:

Many stakeholders are now questioning the purpose of a tool such as carbon certification: voluntary carbon offsetting or voluntary contribution to the global climate effort, Emission trading system (ETS), tool in the framework of the Common Agricultural Policy (CAP) Eco-schemes, etc.

Given the current average price of a ton of CO2 with the French Label, the future European framework should be considered more as a tool to channel different sources of financing more effectively towards low-carbon or carbon-positive projects than as a simple carbon offset tool. The question is therefore not `who should finance these projects’ but `how to coordinate the different sources of financing’.

Recommendation 4: Moving from a carbon market to mitigation regulation

The future certification framework, which will be voluntary, is an opportunity to test different practices and thus produce data on the abatement costs of these practices. In a second phase, this data will allow us to propose, where relevant, binding climate policies, such as regulations that would allow us to reinforce our climate ambitions.

Recommendation 5: Governance: Creating a European Certification Framework that builds on the existing standards by enhancing them

The question of the future of the existing labels and certifications is of great importance to the shareholders already involved in the certification processes. It will probably be necessary to have a higher level of centralisation to ensure that certification has the same value throughout Europe. As a first step, the European Commission should define common general guidelines for Monitoring, Reporting and Verification (MRV), allowing frameworks and methods that respect these rules to continue to be used.

Recommendation 6: Providing robust MRV rules and using the discount principle to find an acceptable balance between accuracy and costs

The question of accessibility in terms of financial and administrative costs to certification is a point of concern for some stakeholders. The use of the rebate principle in the definition of MRV rules makes it possible to find an acceptable balance between the accuracy and robustness of the certification and the associated costs. A discount corresponds to a reduction in the emissions reductions allowed by the project, which accompanies less precise methodological choices. The discount principle thus makes it possible to guarantee the credibility of carbon credits while offering the possibility of using less stringent options to assess the carbon impact of a project.

Finally, a pragmatic approach is needed to avoid discouraging action or undermining the credibility of the system. Two examples to illustrate this.

1) Concerning the double claim: the French government considers that the same carbon gain can be accounted for twice at two different levels: once in a company’s carbon balance sheet and once in the country’s national inventory, as these are two distinct levels of accounting.

2) Concerning the risk of non-permanence: there are sometimes calls to extend the verification and control of forestry projects over several decades. This prospect is highly unlikely and not very credible. Perfectionism can be counter-productive, so we believe it is important to stick to clearly defined rules that can be verified in the field. 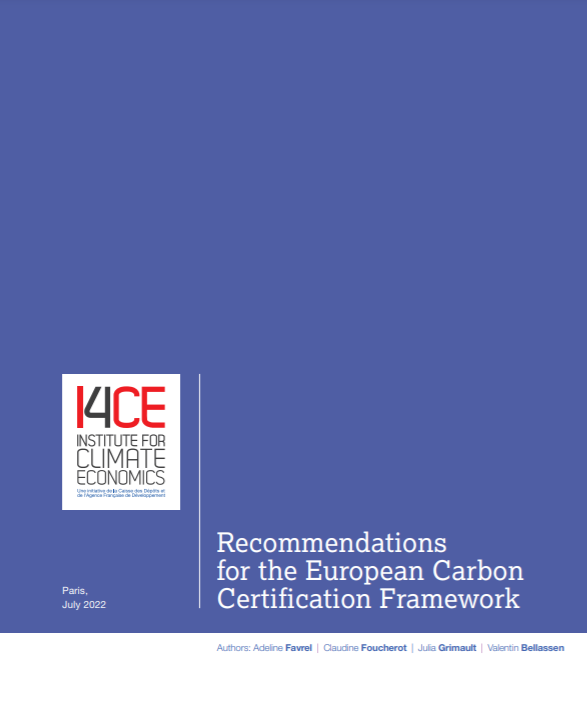