The Paris Agreement: a new international framework to facilitate the uptake of carbon pricing

• Over the past few years, the implementation of domestic carbon pricing has been expanding at the national and sub-national level.
• In contrast to the Kyoto Protocol, the Paris Agreement has adopted a hybrid approach calling on all Parties to determine their own contributions to mitigate climate change affording flexibility to countries in their choice of policy tools.
• Several provisions within the Paris Agreement could create a suitable framework to support the development of transnational carbon pricing policies by recognising the value of mitigation actions which could directly or indirectly put a price on carbon.
• Overall expansion of domestic carbon pricing policies will depend on whether it can enable a cost-effective transition to a low-carbon economy with subsequent benefits and co-benefits. Additionally, it will depend on how the rules and modalities defined in the coming months can be applied to the development of effective carbon pricing policies 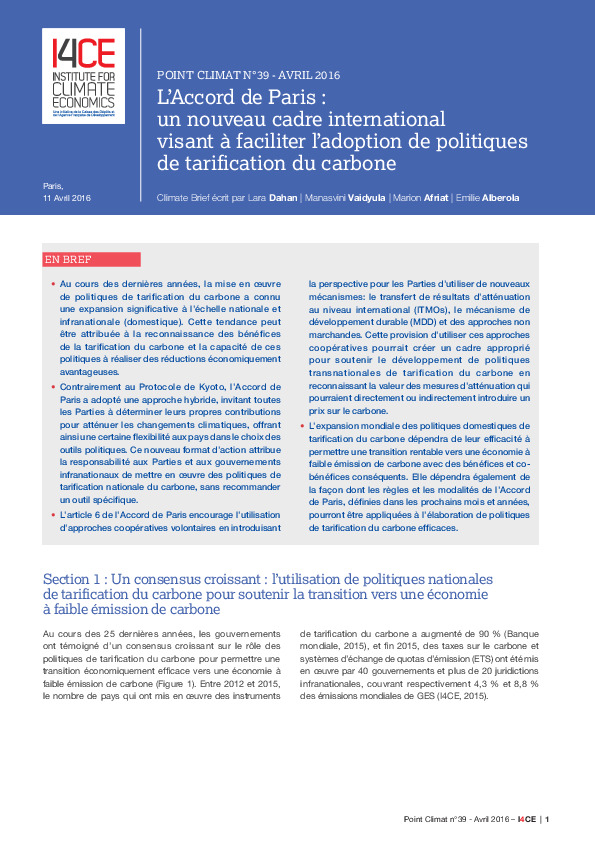 The Paris Agreement: a new international framework to facilitate the uptake of carbon pricing pdf
Related projects See all projects
To learn more See all publications
Press contact Amélie FRITZ Head of Communication and press relations Email
Subscribe to our mailing list :
I register !
Subscribe to our newsletter
Once a week, receive all the information on climate economics
I register !
Fermer