Climate: a look back at 10 years of French government spending

Of course, public money will not do everything; but without public money, it seems difficult today to conceive of a transition that is acceptable to all and sufficiently ambitious. With the French presidential campaign about to begin, the budget that the goverment allocates to the transition will certainly be the subject of intense debate. Especially since two contextual elements increase this tension: on one hand, the European Union has just raised its climate ambition for 2030, and France will have to do its part; on the other hand, the end of the recovery plan could mean the end of the associated funding after 2022.

Evaluating government spending over the past 10 years

With this in mind, I4CE has embarked on an unprecedented exercise: sifting through the entire government budget over the past 10 years, from 2012 to 2021, to identify all the budgetary and fiscal expenditures said to be “favorable” to the low-carbon transition. These expenditures include support for low-carbon mobility, decarbonized energy production, building renovation, energy efficiency, and more generally all state expenditures that contribute to reducing emissions. In these expenditures, climate is not always the main objective: for example, the government has long financed regional trains for local development reasons. It is therefore not a question of spending solely “for” the climate, but rather of spending “in favor” of reducing emissions.

This analysis allows us to recall the history and evolution of these climate-friendly expenditures, and thus to be transparent about the financial resources committed over the past decade. The study of the past also provides some valuable lessons for the future, from which we draw a list of key budgetary challenges for the next five years – as well as some possible solutions.

Increased spending and many reforms

Our analysis reveals that climate-friendly spending has doubled over the past 10 years, from €15bn to €30bn per year – or from 0.7% of GDP to 1.3% of GDP.  This spending is mostly distributed among three key sectors: building renovation, mobility and low-carbon energy production. The stimulus plan has been an unprecedented acceleration, with €5.6 billion planned under the “France Relance” receovery plan for 2021.

Three highlights can be identified. The first is the increase in aid for construction starting in 2014, followed by numerous reforms after 2017 to improve its effectiveness and refocus it on low-income households. The second is the increase in aid for low-carbon mobility, with the increase in the car conversion bonus from 2018 onwards – despite their sometimes questionable effectiveness in terms of climate change – and then the purchase of the SNCF (French national train company) debt in 2020. The third is the support for electric renewable energies – wind and solar – over the decade, with more recent growth in biomethane and hydrogen.

In addition to these direct expenditures, the government has also intervened by recapitalizing companies (Areva, EDF and SNCF). It has also made greater use of an extra-budgetary mechanism: energy saving certificates (CEE), which are included in the bills of energy consumers and which amounted to more than €5 billion. Finally, it has allowed certain sectors and activities to benefit from “tax niches”, i.e. reduced tax rates on fossil fuels, the total amount of which now exceeds €15 billion per year.

10 years expenditure in « favor » to climate

The budgetary challenges of the next five years: spending more, better and for all

From this exhaustive analysis of the past, we can extract some lessons for the future. We identify the main spending challenges for the next five years, for each of the major sectors – construction, housing and energy – and for tax shelters. In general, three needs emerge for government spending.

1) Spend more: we must first spend more, in order to support the necessary renovation of buildings and guarantee low-carbon mobility for all.

2) Spend better: we will also have to spend better, i.e. continue to improve the climate impact of each public expenditure; for example by improving the quality of the work carried out in housing or by restricting the conversion bonus to low-carbon vehicles.

3) Spending for all: we will have to spend for all, paying greater attention to low-income households and to the diversity of situations.

Through this historical analysis and the identification of future budgetary challenges, this note hopes to support the development of a true “climate strategy for public finances” in the presidential programs, which the next President can implement as soon as he takes office. 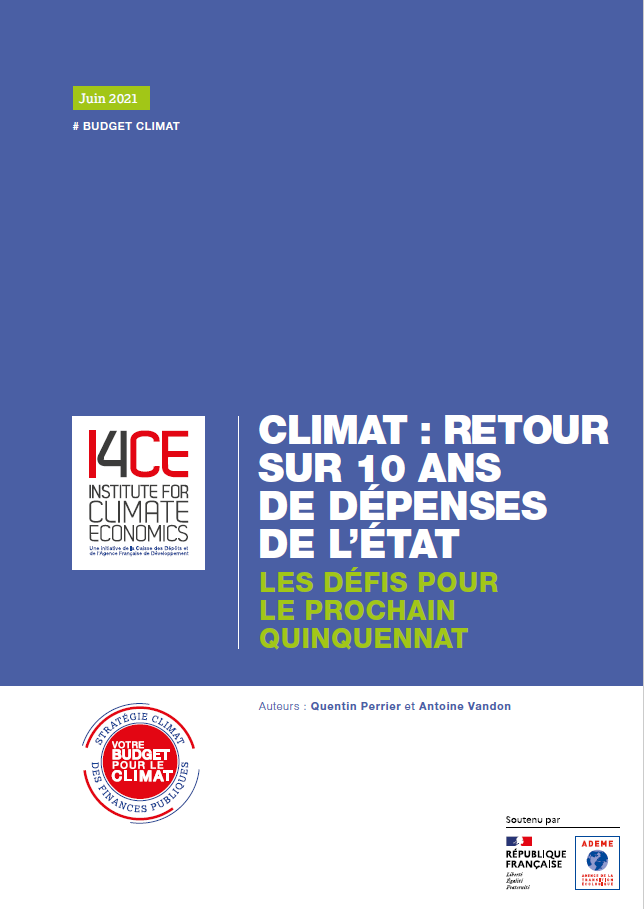 Climate: a look back at 10 years of French government spending pdf
Related projects See all projects
To learn more See all publications
Press contact Amélie FRITZ Head of Communication and press relations Email
Subscribe to our mailing list :
I register !
Subscribe to our newsletter
Once a week, receive all the information on climate economics
I register !
Fermer