Promoting the production and consumption of fossil fuels through subsidies is incompatible with the Paris Agreement on climate change.

While G20 countries have committed to phase out “inefficient fossil fuel subsidies that encourage wasteful consumption” since 2009, the progress towards reform has been mixed. The G20 countries still provide about USD 70 billion in production fossil fuel subsidies, while the total global consumption subsidies are estimated to be in the range of USD 320 billion to USD 5 trillion per year.

Recent examples demonstrate that subsidy reforms, combined with compensation mechanisms, are feasible. While there is no silver bullet to tackle the fossil fuel subsidy issue – and some of them are actually necessary –, the next steps towards a sounder and more efficient approach to fossil fuel subsidies may include: 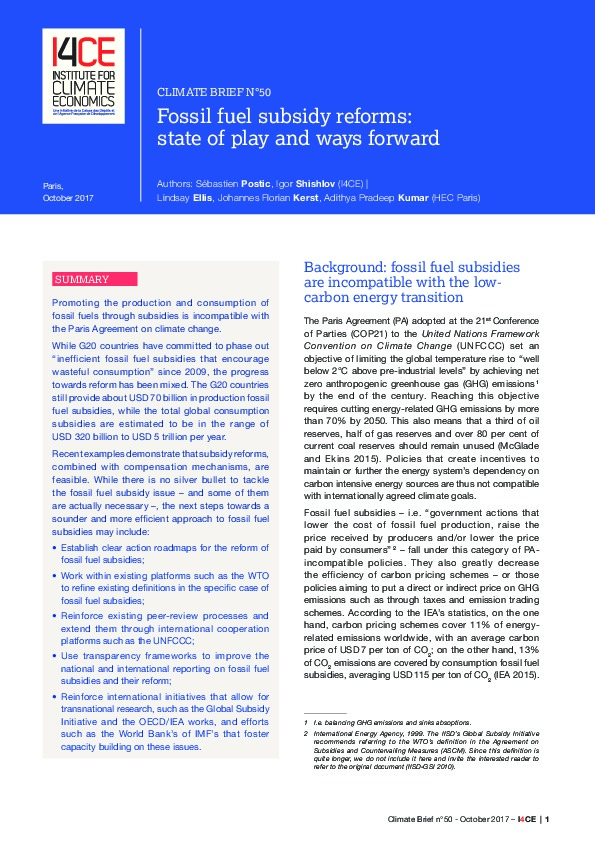 Project Manager – Industry, Energy and Climate Email
To learn more See all publications
Press contact Amélie FRITZ Head of Communication and press relations Email
Subscribe to our mailing list :
I register !
Subscribe to our newsletter
Once a week, receive all the information on climate economics
I register !
Fermer