Indexing capital requirements on climate : What impacts can be expected ?

As the main financier of the French and European economies, banks play a key role in financing the transition. Their current contribution in France is in the order of 8 billion euros per year, but this will need to more than double according to estimates by I4CE. To accelerate this shift for banking institutions and to prevent their increasing exposures to climate risks, the debate has tended to revolve around whether or not there is a need to reform prudential requirements. The purpose of these requirements is to safeguard financial stability and to protect banks in crisis situations, by obliging them to hold reserves against different risks. There are two conflicting positions on climate issues, between those in favour of a Green Supporting Factor (GSF) and those who advocate a Penalising Factor (PF).

The former, mainly from the banking sector, argue that “green” assets are less risky, which should justify a prudential relief measure. For example, for a loan to purchase an electric car, a bank could hold less capital than in the case of a loan for a conventional car. The latter, in other words regulators and researchers, stress that the risk differential between green assets and normal assets has not been demonstrated, but that harmful assets – fossil fuels, aeronautics, combustion vehicles, etc. – are more exposed to transition risks.

This argument is the theoretical basis for penalising harmful activities with a PF. Beyond the debate on the existence of a risk differential, there is a more political issue of establishing whether these instruments would be an appropriate way to increase the contribution of banks to financing the transition. The I4CE report provides new findings on this point. It determines the impacts a GSF or a PF would have on project financing, on the internal profitability of banks, and on credit growth or contraction. Quantitative modelling has been used to outline the whole impact chain, from a change in prudential rules to the financing of a project.

Faced with the challenge of climate change, the mobilisation of the financial sector is crucial, but the conditions of this mobilisation remain to be defined. Minimum capital requirements are perhaps a response to the problem of risk, but with the exception of certain specific cases, their impact on the financing of the transition is limited.

The effects of a GSF (even high) are too limited to stim ulate new projects across all transition sectors. A GSF improves the internal profitability of banks, but does not significantly increase the volume of green loans. As for a PF, it would need to be both high and applied to a limited scope in order to accelerate the planned withdrawal from certain fossil fuel-based activities, while limiting contraction effects for all credit. A broader PF could have counter-productive impacts on the transition.

In view of these limitations, other prudential options are worth exploring and developing , yet receive far less attention, such as the obligation to implement transition plans in the context of supervision (Pillar 2), which would result in changes in the composition of bank balance sheets to finance the low-carbon transition. 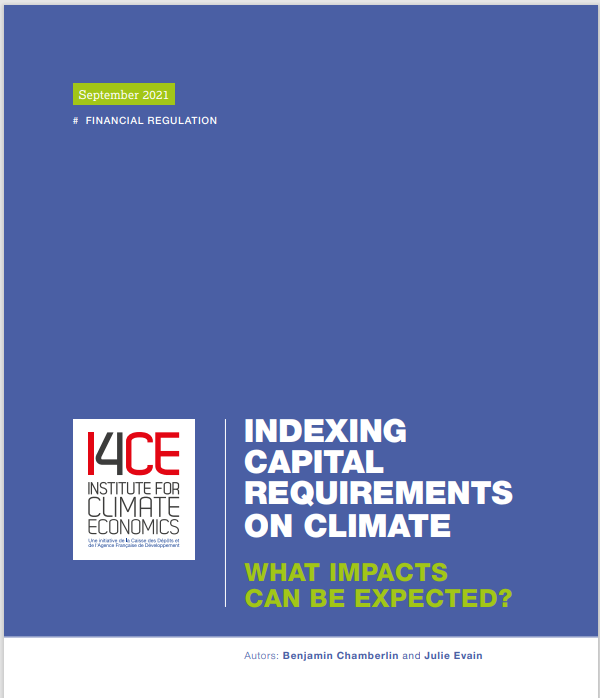 Project Manager - Finance Email
Related events See all events
To learn more See all publications
Press contact Amélie FRITZ Head of Communication and press relations Email
Subscribe to our mailing list :
I register !
Subscribe to our newsletter
Once a week, receive all the information on climate economics
I register !
Fermer