The Regional Greenhouse Gas Initiative (RGGI) is a cooperative effort among nine Northeastern and Mid-Atlantic states to reduce carbon dioxide (CO2) emissions from the electric power sector. RGGI is the first mandatory trading program that caps CO2 emissions in the US through state coordinated cap-and-trade programs.
In 2014, the RGGI member states accounted for 13.1% of the US population1 and 16% of US GDP. In 2012 RGGI states were accountable for 7% (479 million tonnes CO2)1 of total US GHG emissions (6,526 million tCO2), of which 83.1 million tCO2 were emitted via electric power generation facilities from fossil fuel combustion. RGGI states have seen a significant decline in CO2 emissions from the power sector since 2010 (12.4 million tCO2). Although RGGI ranks among the top 20 ETSs globally in terms of aggregate coverage, its contribution to global GHG emissions reduction is relatively small.
RGGI was developed over several years, beginning in late 2003, to address the risks associated with climate change. On 20 December 2005, seven states (Connecticut, Delaware, Maine, New Hampshire, New Jersey, New York and Vermont) issued a Memorandum of Understanding (MOU) that explained the overall goal of RGGI: to create a cap-and-trade program aimed at stabilizing and reducing emissions in participating states, while remaining consistent with overall economic growth and the maintenance of a safe and reliable electric power supply system. This MOU outlined the framework for a Model Rule which informs state practice. Massachusetts and Rhode Island signed the MOU in January 2007 after participating in the early development of RGGI, and Maryland joined the program in April 2007 after an amendment to the MOU. RGGI’s first auction of CO2 allowances was held in 2008, and the first compliance period began on 1 January, 2009. 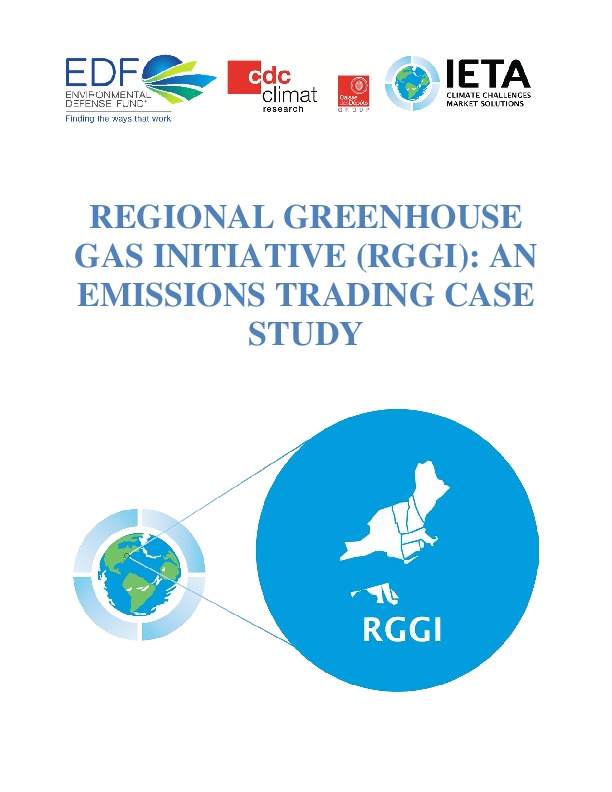 REGIONAL GREENHOUSE GAS INITIATIVE (RGGI): AN EMISSIONS TRADING CASE STUDY pdf
To learn more See all publications
Press contact Amélie FRITZ Head of Communication and press relations Email
Subscribe to our mailing list :
I register !
Subscribe to our newsletter
Once a week, receive all the information on climate economics
I register !
Fermer