Tracking investment into energy transition in Germany and France: a comparison of methodologies and selected results

Since 2012, I4CE has been tracking climate investment and finance in France and similar assessments have been conducted in Germany by IKEM. This study compares the methodologies and results of these two exercises – the most advanced in Europe. The paper allows an initial comparison of investments in the two countries, identifying similarities in priority areas for investment – as well as important differences in how investments are financed. However, results should be treated only as indicative due to continued significant differences in what is included in estimates.

The paper discusses the main similarities and differences in the two tracking methodologies, the status quo of available information and various methodological and data challenges encountered throughout two approaches. The analysis provides an important starting point for understanding the investment challenges associated with the climate and energy objectives. It also identifies what can – and cannot – be compared between the studies due to differences in assessment approaches, definitions and source of data. While there is significant convergence of the methodological approach of the two studies, further harmonization of what types of investments and financing are included in sectoral totals is needed to facilitate more detailed comparisons.

Despite different methodologies,  interesting observations can still be made on the large-scale similarities and differences of how France and Germany finance their energy transitions. Concessional debt plays a large role in financing energy transition in Germany whereas diffuse instruments are used in France. The German state-owned development bank, KfW, plays a vital role in financing the energy transition, disbursing EUR 32 billion of concessional loans to households, enterprises and public actors through local branches of private banks making the capital easily accessible for projects of various size. In France, this practice of “onlending” is less developed, where the major part of concessional debt totaling EUR 3.5 billion was issued directly by the government-owned financial institutions such as the Caisse des Dépôts. In France, different actors rely on different financial instruments, including bonds, concessional loans directly disbursed by government-owned financial institutions, subsidies, commercial debt, balance sheet financing, and others. The high share in diffuse investments mirrors the difficulty of attracting private investment for smaller projects in France.

In both studies the sectors, which attracted the largest share of climate-specific investment were the building sector and the energy generation and transmission sector. These sectors also underlie the highest sector-specific targets for greenhouse gas emissions (GHG) reductions by 2030.

Working to better understand these similarities and difference can help foster learning between countries with the aim of finding new and effective means of financing the energy transition. But to do this, a common methodological basis is needed to ensure comparability and consistency across definitions and estimates.

Building on the approaches and examples from their peers, Member States could develop strategies to mobilise (mainly private) capital for the climate and energy transition, in line with investment need estimates as supplied by National Energy and Climate Plans (NECPs).

This paper is also available in German from the Franco-German Office for the Energy Transition website.

This paper with written with support from

This paper has been written by external experts for the Franco-German Office for the Energy Transition (DFBEW/OFATE). This contribution is published via the platform offered by OFATE. The points of view expressed in this paper represent exclusively those of the authors. The elaboration of the text has been carried out with the greatest possible care. OFATE declines any responsibility for the accuracy and completeness of this document.

On IKEM’s side, the paper is a part of Task 4.7 “Technical-systemic analysis with a focus on energy efficiency in buildings” of the System Integration project (Enavi) financed by the Kopernikus platform of the Federal Ministry of Education and Research (BMBF). 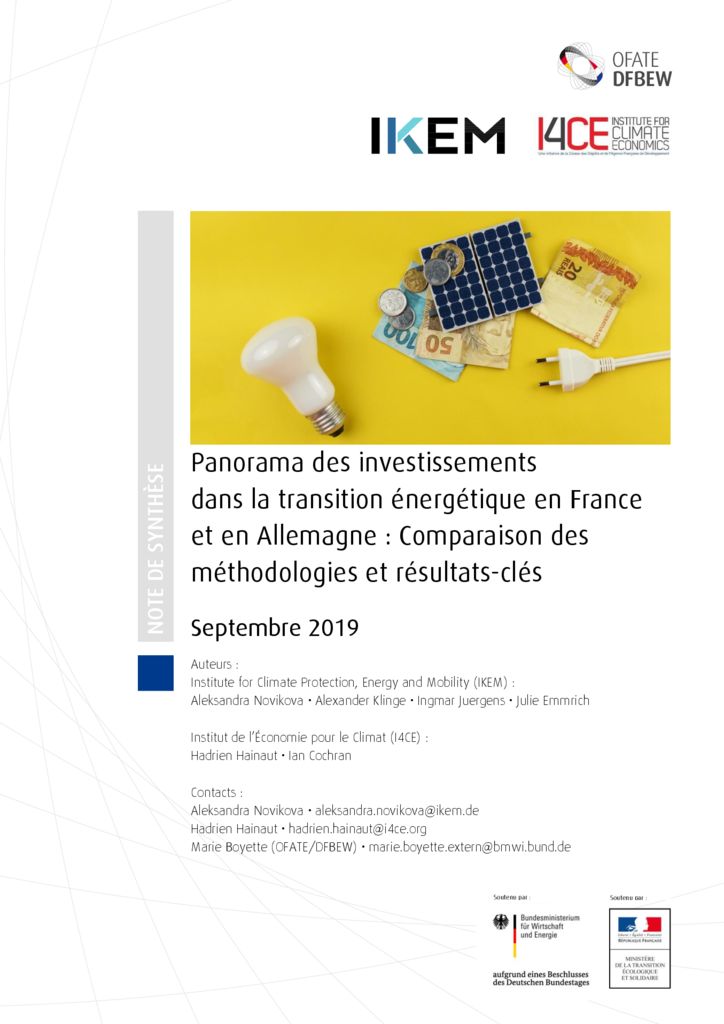 Tracking investment into energy transition in Germany and France: a comparison of methodologies and selected results pdf
I4CE Contacts

Project Manager - Climate investment Email
Related projects See all projects
To learn more See all publications
Press contact Amélie FRITZ Head of Communication and press relations Email
Subscribe to our mailing list :
I register !
Subscribe to our newsletter
Once a week, receive all the information on climate economics
I register !
Fermer