On 6 July, the Minister for the Ecological and Inclusive Transition, Nicolas Hulot, organized a conference to mark the first anniversary of the Climate Plan. After a morning spent reviewing the progress made by France, the afternoon was dedicated to four workshops. These workshops were chaired by two Secretaries of State from the Ministry, the ADEME President, and Benoit Leguet the Managing Director of I4CE.

The latter provided an opportunity to discuss the biological carbon sinks in France. Agricultural and forest soils, as well as forest biomass, will have key roles to play in achieving carbon neutrality and offsetting residual emissions from other economic sectors. In a format inspired by the UN Talanoa Dialogue, participants highlighted the many technical solutions available to promote carbon capture while preserving biodiversity: agroecology, agroforestry, hedge planting, use of organic matter in cities, etc. They also highlighted the importance of the future reform of the Common Agricultural Policy, identified existing tools to be reinforced, and innovative tools such as the upcoming low-carbon standard, a project in which I4CE is a partner.

All these proposals were then presented by Benoit Leguet to the Minister Nicolas Hulot. They should enable the Ministry to identify new avenues for action to move France towards carbon neutrality. 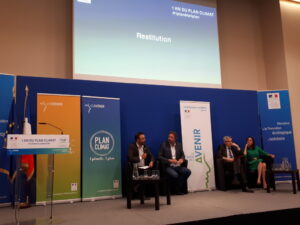