Implementing prudential transition plans for banks: what are the expexted impacts?

The European Union has made rapid progress on the issue of transition plans for companies and banks. First of all, the CSRD directive obliges each listed company to publish its plan for achieving carbon neutrality by 2050. Published by EFRAG this summer, the standards set for these plans can be considered ambitious and commensurate with the challenges they face. With regards to banks, it is now clear that they will be required to publish their transition plan. What remains under debate is whether these transition plans should be integrated into prudential regulations, which would open the way to numerous possibilities of action and sanctions by supervisors.

This debate is currently taking place in the context of the negotiations on the banking package, and more specifically the revision of the Capital Requirements Directive (CRD). The EU is discussing the introduction of transition plans in Pillar 2 of the prudential regulation, which determines the supervisory process of banks, and verifies that their risk management processes, and capital adequacy match their risk profiles.

Two options are currently on the table:

In the second option, the bank’s transition plans are based on a strategic vision of the transition of all the bank’s activities. The bank must have a vision of the transition sector by sector, with a 2050 neutrality objective, as well as intermediate objectives. Moreover, it must understand how each financing granted will contribute to the attainment of the objectives of the plan. The prudential transition plan must also make it possible to check that the internal processes are consistent with this vision.

In order to understand the value of a global and robust vision of prudential transition plans, and to feed into the debates currently underway in the European Parliament, I4CE has conducted a qualitative analysis of the expected impacts. By meeting with nearly thirty experts from the banking sector and the academic world, and by benefiting from the views of various European supervisors, we looked at the impacts of integrating global transition plans into prudential regulation on:

Will transition plans strengthen the credibility of bank commitments?

Furthermore, one of the main impacts expected from this new prudential obligation is to remedy the current lack of effective implementation of net-zero commitments. Supervisors would then have the ability to verify the actual implementation of the transition plan and to take corrective action if it proved to be deficient. A requirement for prudential transition plans shared at European level would avoid ’prisoner’s dilemma’ situations and would push all European banks to integrate climate issues in a more harmonised way. Finally, their integration into the SREP would emphasise the coherence of internal procedures with the objectives determined by the plan.

The second type of impact expected from prudential transition plans is to act on internal blockages within banks. These are two types of blocages: structural blockages and blockages linked to conflicts of objectives.

For the structural bottlenecks currently present within banks, the transition plans should push banks to rethink their structuring in terms of team organisation, human resources, and the integration of climate issues into their internal processes when deciding on the granting of financing.

Beyond structural objectives, banks also face bottlenecks related to the conflict of objectives between the risk-based approach and the subjective perception of climate issues.

Specifically, the transition plan would help banks overcome this tension and join the dual materiality dynamic defended by the European authorities. This involves recognising the risks inherent in green assets, but also helping banks to anticipate the drop in profits from fossil fuel activities. It also involves better integrating environmental materiality into risk management tools.

In order to understand the impact of prudential transition plans in the real economy, three sectors were chosen, based on their key role in reducing GHG emissions and their importance to the banking sector.

The energy renovation, the central issue is the choice of indicators, because an artificial greening of portfolios must not lead to the exclusion of low-income households from credit. These households are the main ones concerned by the renovation objectives. It is therefore important to ensure that the objectives of transition plans are relevant, with targets for the volume of  or renovations granted, rather than targets for emissions reductions.

The automotive sector, the bank is a key player as it finances both manufacturers and vehicle buyers, as well as the many players in the sector (subcontractors, garages, dealers, etc.). Banks must continue to support the transition of the automotive sector in their commitments set out in the transition plans, not only by proposing offers adapted to the purchase of electric vehicles but also by extending their strategy to all the production chains and professions in this sector.

The ongoing battle at European level over the standards that will prevail in prudential transition plans should be decided by parliamentarians by the end of the year. This will be followed by the EU Trilogue and implementation by supervisors. These changes in European regulations are essential to bring about the necessary changes in the practices of banks and their supervisors. However, as the Governor of the Banque de France, François Villeroy de Galhau, reminded us in his speech at Climate Finance Day, the next stage will be that of the Basel Committee. This proposal must be discussed in this arena, which brings together the world’s largest economies, in order to ensure consistency at the international level. One positive sign is that, after several years of silence due to the Trump administration, the Financial Stability Board has opened the door to integrating transition plans into prudential regulations. 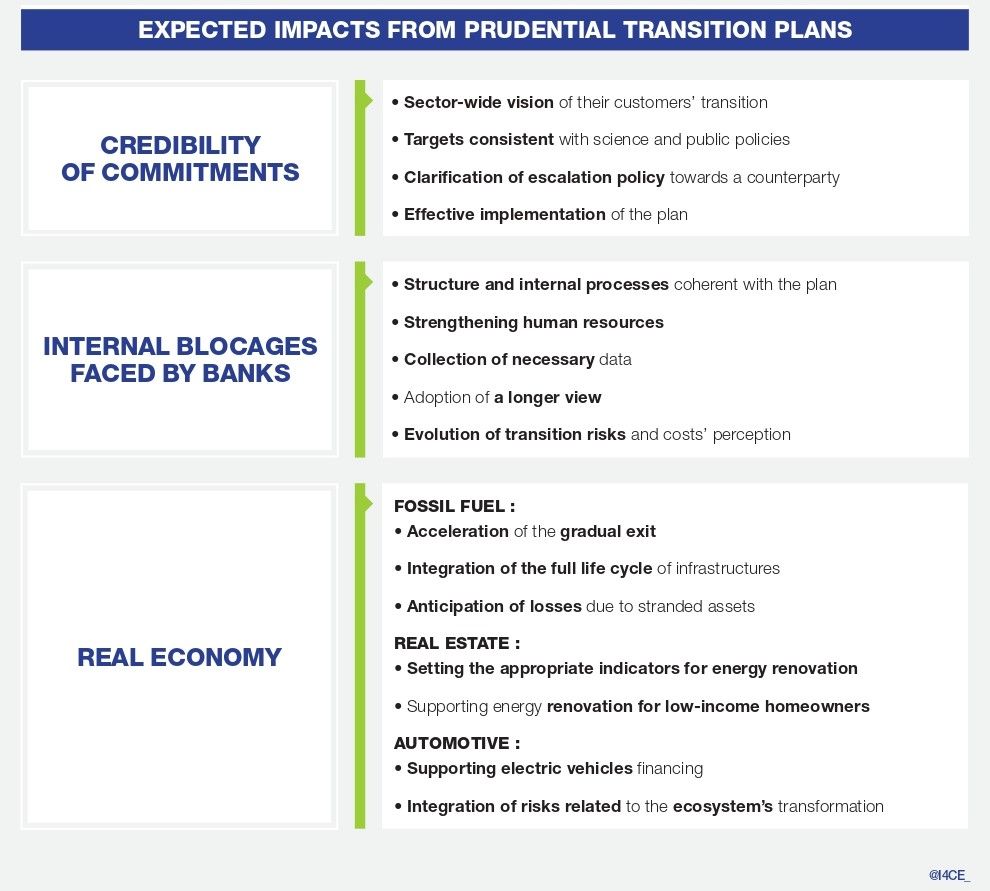 This project has received funding from the European Union’s Horizon 2020 research and innovation programme under grant agreement N°101003884. 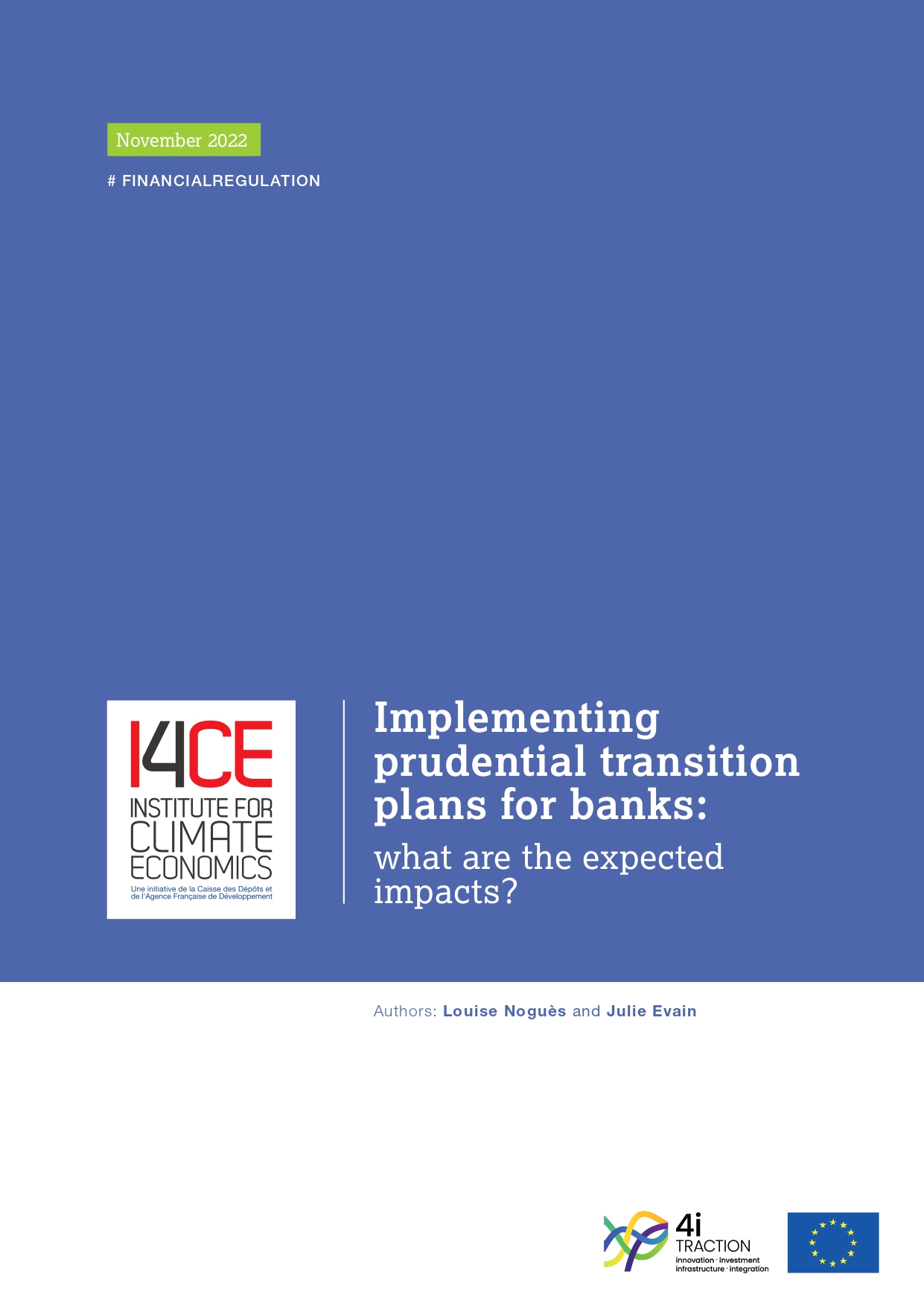