The implications of 2015 for Financing Climate-Consistent Development

I4CE has just published an article in the Fall 2016 edition of La lettre de l’I-tésé n°29.

The article discusses the international milestones marked 2015 as a seminal year with long-term implications for countries around the globe. From the adoption of the 2030 Development Agenda that comprises 17 Sustainable Development Goals to the Paris Climate Agreement, a clear signal has been issued by the international community on the transversal nature and important complementarity of the climate and development agendas. If concrete actions match announced ambitions, this portends far-reaching, transformational implications for energy production and consumption.

For the first time, both developing and developed countries have been called by the international community to take climate change into consideration as the world focuses on achieving the ambitious goal of “zero-net” emissions by the end of the century. As such, each country has committed to putting forward its contributions to this global goal, taking into consideration its particular circumstances. In all countries, achieving these shared objectives will require transforming the energy system, in many instances taking the form of a “revolution” to replace the current dependency on carbon-intensive sources. This requires both direct incentives to foster investment, but also the creation of a regulatory and investment environment within which low-carbon, climate-resilient projects become competitive and provide financial returns. Furthermore, it is increasingly recognized that financing the massive investment necessary worldwide requires increasing international public climate finance as well as redirecting in-country public and private flows.

The text is in English with a short summary in French. 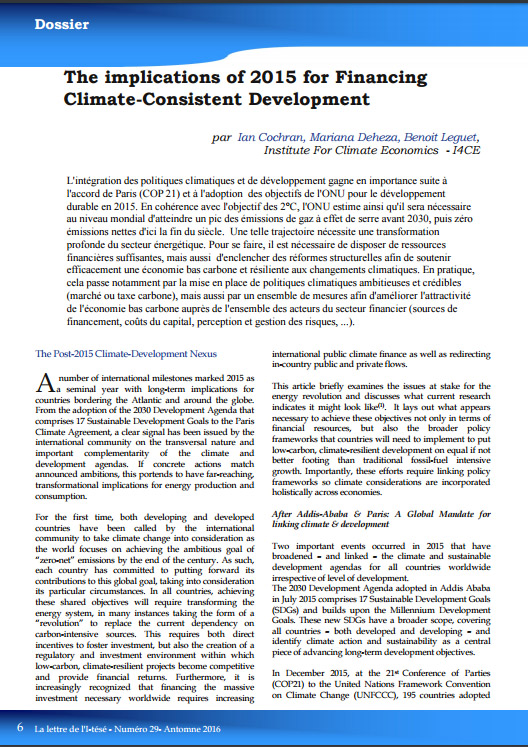