COP21 – a successful ‘end of the beginning

The Paris Agreement provides a clear signal and a solid framework for climate action. Balanced and ambitious in its objectives – including full decarbonization of the global economy before the end of the century – it has all the conditions to encourage everyone to do more.

In establishing a new international climate change regime, the Agreement focuses on the essentials: guiding countries towards low-carbon and climate resilient economies. The main challenge resides not in the direct implementation of the decisions taken in Paris, but rather in the alignment of countries’ national strategies with a decarbonization trajectory.

COP21 marks the advent of a new regime of international cooperation rather than a ‘utopian’ and politically unpalatable system to punish or coerce States to take action. It confirms the desire to engage both State and non-State actors on climate action. In this respect, it is a real victory of multilateralism.

Indeed, COP21 marks the “end of the beginning” of a long negotiations process to shift to a permanent regime, completed by regular appointments to boost ambition. This victory, however, will become historical only if this cooperation leads to enhanced action and concrete results. And this is where the hard work begins! 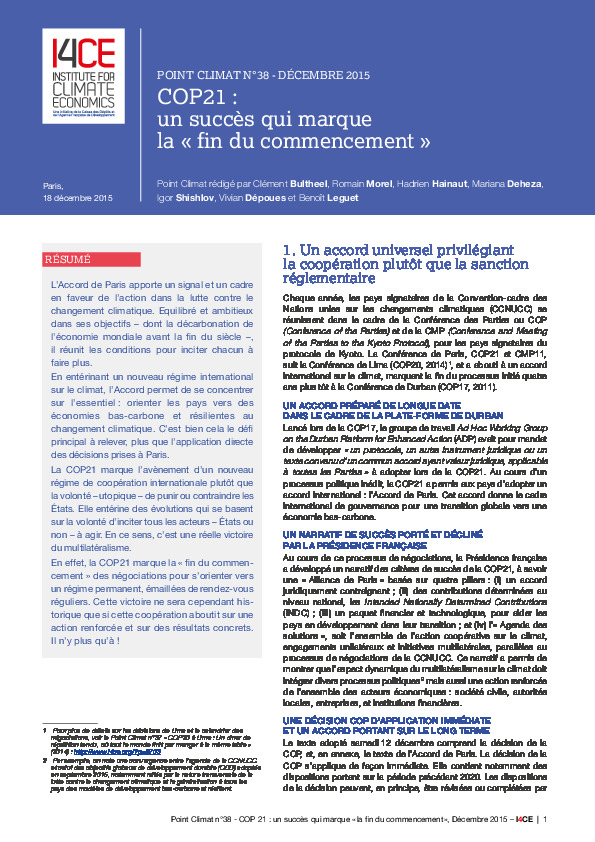 COP21 – a successful ‘end of the beginning pdf
I4CE Contacts