In sharp contrast with the stimulus strategy adopted in France in 2008, which focused exclusively on directly visible economic benefits, each public euro invested to recover from the crisis will have to value the environmental and health co-benefits. This is the thesis of this article by I4CE and Terra Nova. With the increase of the French public debt and the eventual reduction of budgetary room for manoeuvre, valuing all the co-benefits of public action is no longer a simple option but an imperative. It would reduce the 50 billion euros/year costs of air pollution in France, among other societal benefits.

Story or legend, the “It’s the economy, stupid!” slogan that supposedly helped bring Bill Clinton to power in 1992, highlights the tendency of voters to prioritize the economy in times of crisis. After the lockdown imposed by Covid-19, there may be a strong temptation, when developing and implementing an exit strategy, to favour taking into account directly observable economic impacts, without any other considerations, as was the case after the 2008 crisis.

Here we show that any exit policy must be subject to a broad set of requirements which values the economic, environmental and health “co-benefits” of public action. Among other examples, decarbonized transportation measures (from bicycles to rail freight) have direct effects in terms of the economy (jobs, added value in the sectors involved), the environment (reduction of air pollution which costs France about 50 billion euros/year, reduction of greenhouse gas emissions) and health (this same pollution kills 50,000 people/year, and weakens populations when they are exposed to pandemics).

Doing this is a matter of responding to “social demand”: in the same way, as Emmanuel Macron recently observed, when we emerge from the crisis, “people will no longer tolerate breathing polluted air” 1. And, since between the triggering of the subprime crisis in 2008 and the exit from the emergency phase of the Covid-19 crisis, French debt will have increased by 50% of GDP, reducing the public authorities’ margin for budgetary manoeuvres, maximizing the co-benefits of action is no longer simply an option, it is an imperative: “It’s (also) the economy, stupid! 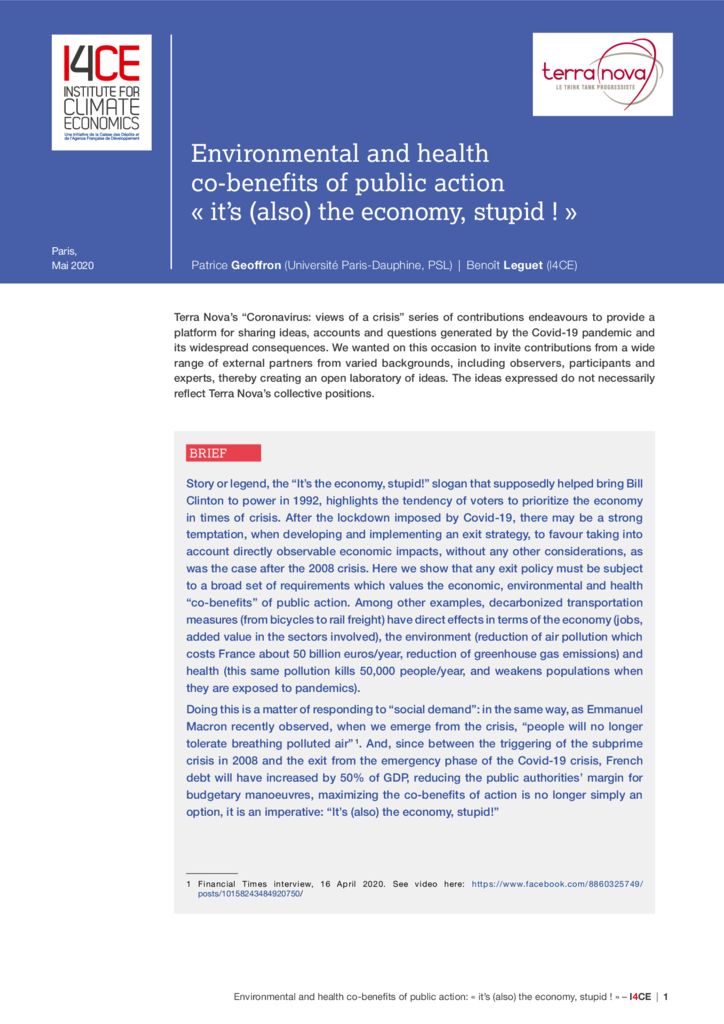