The Landscape of Climate Finance is a comprehensive study of domestic investments which support climate mitigation in France. This study maps the financial flows supporting investments leading to the reduction of greenhouse gas emissions (GHG) across the French economy. Findings are compared to the historical time series and assessed in comparison to projected investment needs to achieve national greenhouse-gases reduction targets and other energy transition objectives. In that regard, the Landscape contributes to the public debate on the relevance of public and private climate finance.

The Landscape is based on a transparent methodology, and its results are discussed in a steering committee composed of representatives from the Ministry of Ecological Transition and the French Energy Management Agency (ADEME).

Climate investments increased rapidly over the period preceding the coronavirus crisis, reaching 48 billion euros in 2019. Most of these investments took place in the buildings, transportation, and energy production sectors. Energy efficiency mobilised 40% of total investments.

Despite their recent increase, climate investments remain insufficient compared to the levels needed to achieve the low-carbon transition in France. This shortfall can be explained by the low profitability of projects, regulatory obstacles, or by the lack of adequate financing solutions, among other factors. In order to catch up with the trajectory of the French national low-carbon strategy (SNBC), an additional 13 to 17 billion euros (compared to 2019 levels) need to be invested every year in the buildings, transportation, and renewable energy sectors. The French recovery plan adopted in September 2020 includes a green component, but it is still too early to assess whether it will trigger enough investments to help bridge the gap. Achieving zero net emissions by 2050 will also require additional investment needs in the agriculture, industry, and research sectors, but these are still poorly documented.

An adequate mix of policies, regulation as well as technical, organisational, and human support, could trigger the required investments. Based on our estimates, in the short term, an additional annual public stimulus package of 9 billion euros could trigger 21 billion euros of additional climate investments every year. In the medium term, this public financial effort should increase to 22 billion euros above historical levels. While the costs of some equipment are expected to decrease, the number of projects which need to be funded will increase. Additional public money is not enough: providing support, implementing regulations, and creating the right conditions for private investment are essential to raise climate investments.

Fossil investments increased again in 2019 and reached a record level of 71 billion euros, which represents a 70% increase compared to 2014. Most of these investments go to equipment consuming fossil fuels: passenger cars alone account for almost two thirds of the total. Fossil investments delay the reduction of GHG emissions, public authorities can use fiscal and regulatory means to reduce them.

Investment in the retrofitting of private dwellings has increased since 2011. However, a very limited share of this expenditure results in sufficient reductions in energy consumption, as renovation actions in the same dwelling are neither planned nor coordinated. Almost one third of the amounts invested is covered by public policy instruments in the form of subsidies and subsidised loans. However, these instruments are not designed to support a level of energy performance in line with national targets.

Until 2019, the growing uptake of low-carbon vehicles did not replace sales of thermal cars. After a slow early phase, investments in electric, CNG and hybrid vehicles grew rapidly , by 28% every year on average since 2011. Regulation, charging infrastructure and technological developments contributed to their popularity, but their market share remains limited. In 2019, four out of five cars sold were more emissive than the level associated with the national target trajectory.

Investments in transport infrastructure reached of 12.4 billion euros in 2019, their highest level since 2011. Current investments are close to the planned levels and will have to be maintained. However, it is unclear whether they will be enough to accommodate the number of passengers and the volumes of goods forecasted in the French national low-carbon strategy.

Investments in renewable electricity production facilities have been stable since 2017 at 4.5 billion euros per year, with contrasting trends between renewable sources. The pace of investment remains insufficient in relation to the objectives set out in the French Multi-annual Energy Plan (PPE), with some projects sometimes facing administrative delays and local resistance.

Investments in renewable heat increased rapidly over the past three years, especially in heat pumps. To compete with fossil fuels alternatives, renewable heat projects often benefit from public support through the Fonds Chaleur managed by the French Energy Agency. Still, investments remain below the levels required to meet the objectives of the French Multi-annual Energy Plan.

The next edition of Landscape of Climate Finance will focus on the impacts of the Covid-19 crisis and subsequent recovery measures on climate investments in 2020. 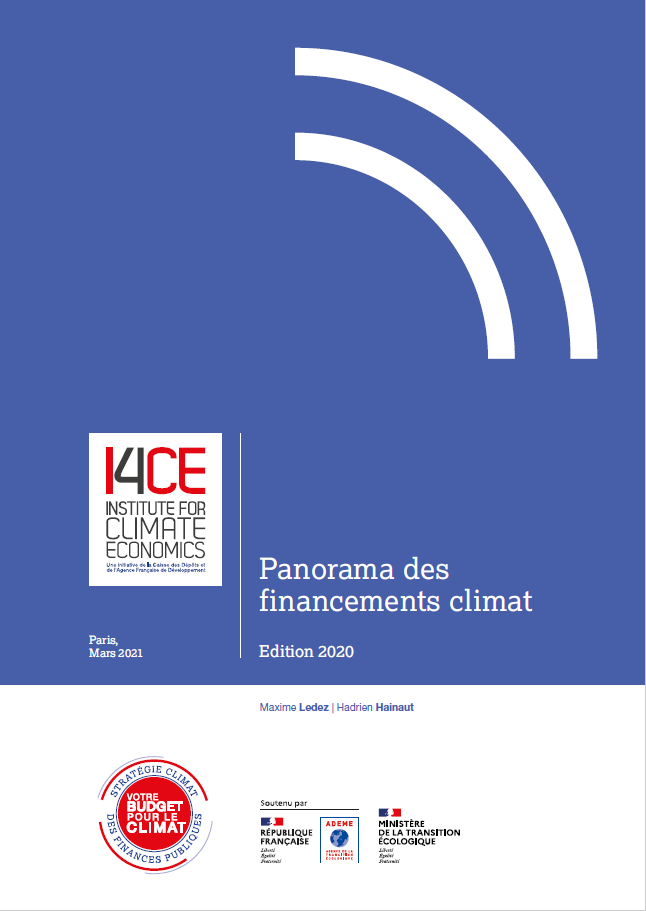