68 As of 1 August 2022, there are 68 explicit carbon pricing mechanisms (taxes or tradable allowances – Emissions Trading Schemes (ETS)) around the world. The jurisdictions (countries/ groups of countries/of provinces) covered by these mechanisms represent more than 70% of global GDP. The latest of these mechanisms is the Austrian carbon market, launched in July 2022.

1¢-134 $ The range of explicit carbon prices is widening further: as of 1 August 2022, they range from 1 US cent to USD 134 per tonne of CO2eq (tCO2eq). These two new extremes are due to the recent launches of carbon pricing mechanisms in Baja California (Mexico) and Uruguay. However, prices remain below USD 10/ tCO2eq for more than 60% of covered emissions. The High-Level Commission on Carbon Prices, chaired by Nicholas Stern and Joseph Stiglitz, estimated that the full incentive effect of these mechanisms is reached for prices between USD 40 to 80/tCO2eq in 2020 and USD 50 to 100/tCO2eq in 2030.

100 bn Carbon revenues were nearly USD 100 billion in 2021. This represents a more than 80% increase year-on-year (USD 53.1 billion in 2020, USD 97.7 billion in 2021). This increase is largely driven by the rise in allowance prices on the European carbon market, which exceeded the symbolic threshold of EUR 100/tCO2 for the first time in the summer of 2022. For the first time, the majority (70%) of this revenue is provided by ETSs rather than taxes (30%). ETS revenues tend to finance clearly defined environmental priorities, while tax revenues are more likely to go directly to national budgets. However, global taxation remains generally harmful for the climate, and the trend is not positive. The OECD noted at the end of August that fossil fuel subsidies doubled in 2021, from USD 350 bn to USD 700 bn.

20 % The jurisdictions implementing a carbon price account for about 55% of global greenhouse gas (GHG) emissions. However, some sectors or populations may be exempt (totally or partially) from paying this price for various reasons. Taking into account these scope and exemption effects, only 20% of anthropogenic GHG emissions are covered by a carbon price.

New pricing mechanisms were introduced in 2022. Uruguay has implemented a tax with the most ambitious price in the world to date (USD 134/tCO2eq). Following a 2019 ruling by the Mexican Supreme Court, allowing states to set their own environmental taxes, the state of Tamaulipas becomes the sixth Mexican state to implement a carbon price. In Canada, the State of Ontario’s Emissions Performance Standards (a `baseline-and-credit’ type mechanism) and New Brunswick’s ETS came into operation this year as well. In the United States, Oregon’s ETS was passed in 2019 but actually implemented in 2022. Finally, Austria has just launched its carbon market for transport and building heating in July 2022, modelled on the German scheme. Virginia, on the other hand, has officially annouced its intention to exit the RGGI Initiative.

The vote by the European Parliament on the border carbon adjustment mechanism (CBAM) also breathes new life into carbon prices globally. In addition to the “mirror” mechanisms adopted or discussed in partner countries (Turkey, Taiwan, Indonesia in particular), the notion of a “climate club” of countries developing ambitious internal policies, supported by adjustment mechanisms at the level of the entire group, is returning to the discussions; the United States and Canada have expressed their interest in a cooperation of this type with the European Union on steel and aluminum.

The EU ETS, confirmed cornerstone of a diversified climate policy

The “Fit for 55” legislative package should enable the European Union to achieve its new 2030 target of reducing net emissions 55% below 1990 levels (the previous target was 40%, on gross emissions). The first texts, voted in July 2022, significantly strengthen the role of the European carbon market, extending it to maritime transport, creating an “ETS2” dedicated to road transport and buildings, and reconsidering the rules to be used with air transport, in connection with the “CORSIA” mechanism of the International Civil Aviation Organization.
However, the “Fit for 55” package also recognizes the limits of an “all ETS” policy, by accompanying it with revised sectoral measures (renewable energies, energy efficiency, building performance standards, management of the Land Use, Land Use Change and Forestry (LULUCF) sector) or new ones (alternative fuels, end of combustion engines in 2035) and by introducing two new mechanisms:

• a border carbon adjustment mechanism (CBAM) putting European industry on an equal footing with their competitors from countries without a carbon price and encouraging the emergence of new mechanisms among the EU’s trading partners, while reducing free emission allowances (see Global Carbon Account 2021);
• a Social Climate Fund to support the countries and households most affected by the economic impacts of this transition, funded by the EU ETS and CBAM. 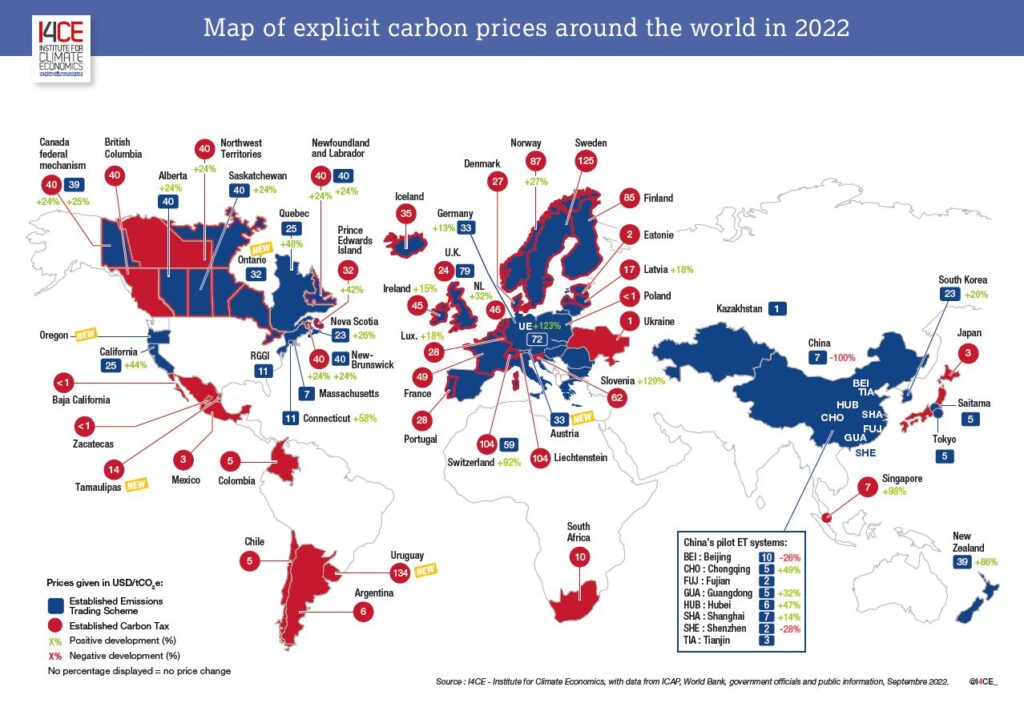 Main sources of the report and relevant links: 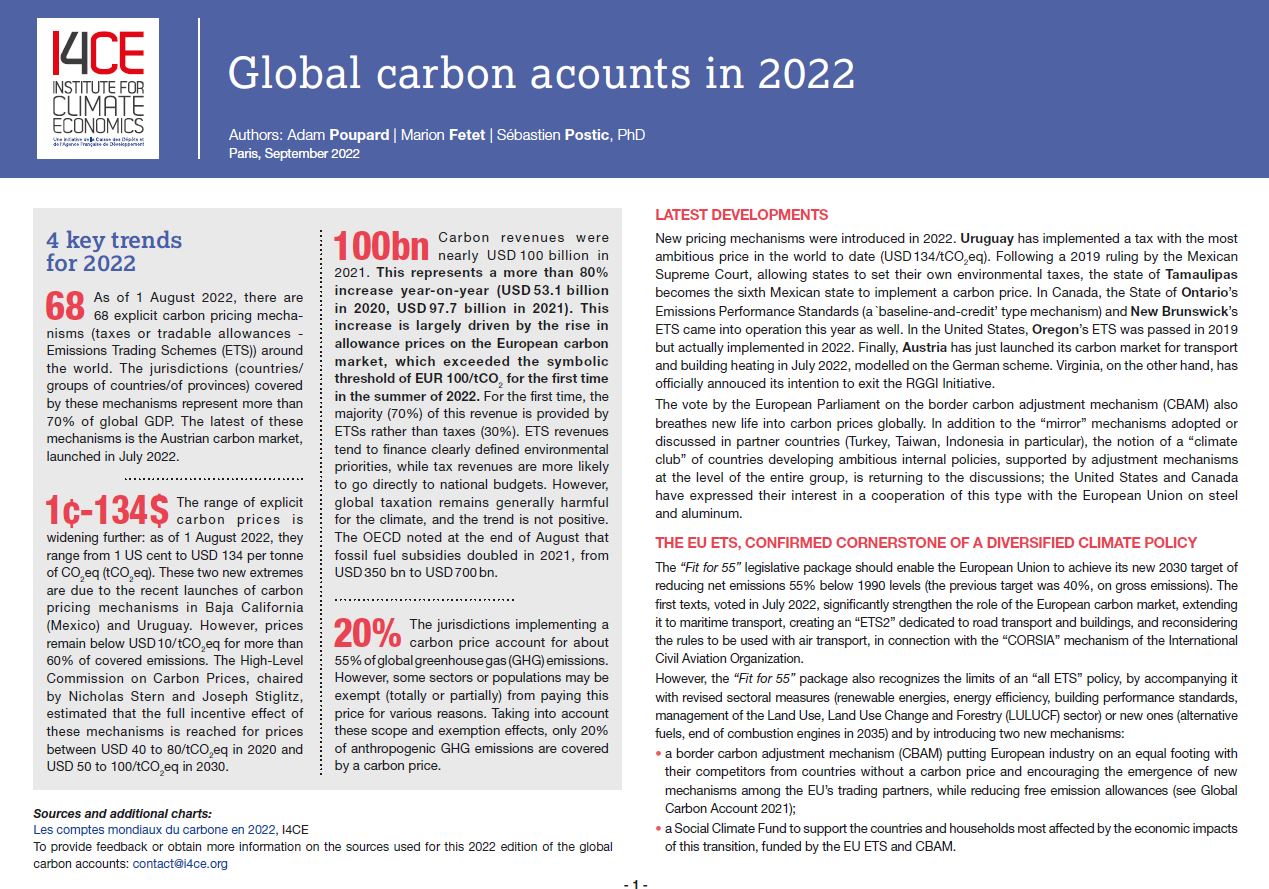