The Landscape of climate finance is a comprehensive study of domestic financial flows in favor of climate and the broader energy transition in France. The study maps the flows supporting investments leading to greenhouse gas mitigation across the French economy. The principal objective of the study is to support public debate on the role and relevancy of public and private financial flows in support of climate-related investments.

In 2014, up to €32bn of investment contributed to climate mitigation in France.

This total is made up of €12.8bn invested in energy efficiency projects, €6.5bn for the development of renewable energy production and €10.5bn for sustainable transport and network infrastructure. Investment in new and existing nuclear plants and GHG reduction outside of energy consumption (such as agriculture, forestry and industrial processes) totalled an estimated €2.1bn.

As project developers, households invested €9.2bn, representing 29% of total investment in favour of climate mitigation in 2014. Most of this investment was made in the building sector. To finance their investments, households primarily used their own equity (€4.2bn) and commercial debt (€2.3bn). They benefitted from €2.1bn of public grants and subsidies.

Private companies, including special purpose vehicles (SPVs) invested €9.6bn or 30% of total investment in favour of climate mitigation in 2014. Their investment went primarily in centralized energy production and networks, including €3.5bn invested in renewable power generation. Companies financed this investment at the project-level or at the company’s balance-sheet level, using €5.6bn of commercial debt and €2.1 of equity and own funds.

Public project developers, such as central and local governments, public housing operators and infrastructure managers invested €13bn in 2014. They financed their investment principally through grants and transfers from other public institutions, totalling up to €6.4bn. Public housing offices also benefitted from low-interest debt emitted by public financial institutions such as Caisse des Dépôts, totalled €1.3bn in 2014. 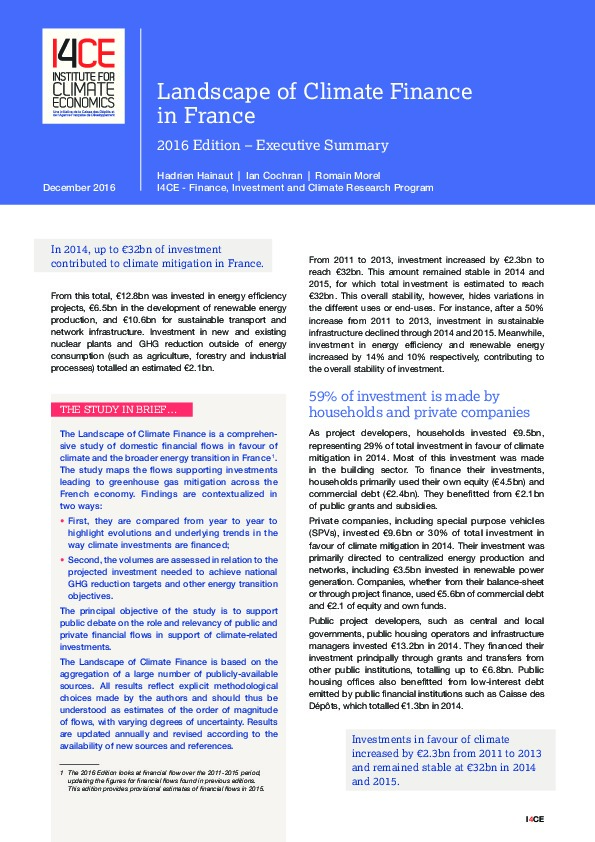